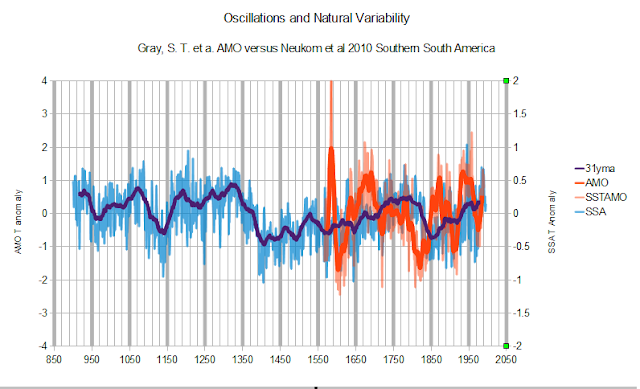 Southern South America temperature reconstruction by Neukom et al versus Atlantic Multi-decadal Oscillation recosntruction by Gray et al., simple comparison of hemispherical ocean oscillations caused by perturbations, mainly volcanic in this case, causing cooling in the northern hemisphere followed by cooling in the southern hemisphere as more internal energy from the southern oceans is transferred to the northern hemisphere.  With the separate y-axis orientation, the AMO amplitude on left scale is roughly twice the SSA amplitude on the right scale.  Note the 1816 event rapidly reduced northern Atlantic SST with an more gradual decline in the SSA temperatures.  Since the Southern South American reconstruction is highly influenced by the temperatures of the southern oceans, it make a reasonable proxy for the southern oscillation.  There would be a continuous warming trend due to this perturbation from ~1820 in the North Atlantic and ~1850 in the southern oceans.  That would be ~150 years of natural recovery from a natural cooling event of ~0.5C degrees.

The same recovery with the same dip, or Super Duper La Nina is seen in the Tmin data for Oceania as published in the BEST surface temperature data.  One would need to be blinded by ideology not to see the obvious. 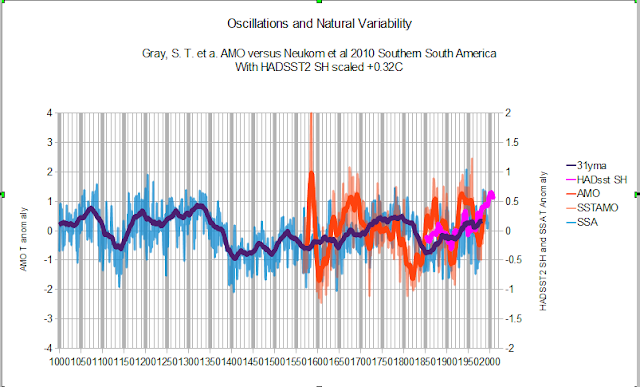 Just added the HADSST2 Southern Hemisphere to the tail of the SSA reconstruction for them that would complain.  Yes, it is warmer now.
Posted by Recovering in the Florida Keys at 5:19 PM