From the free dictionary here are two terms that are often confused.

Heat sink
n.
1. An environment capable of absorbing heat from an object with which it is in thermal contact without a phase change or an appreciable change in temperature.
2. A protective device that absorbs and dissipates the excess heat generated by a system. (my bold)

Heat reservoir
A thermal reservoir, a short-form of thermal energy reservoir, or thermal bath is a thermodynamic system with a heat capacity that is large enough that when it is in thermal contact with another system of interest or its environment, its temperature remains effectively constant.[1] It is an effectively infinite pool of thermal energy at a given, constant temperature. The temperature of the reservoir does not change irrespective of whether heat is added or extracted. As it can act as a source and sink of heat it is often also referred to a heat reservoir or heat bath.


The oceans are often incorrectly called heat sinks by many involved in the climate change debate.   They are more appropriately called a heat reservoir since the heat capacity of the oceans is about 1000 times greater than the atmosphere and the average temperature of the upper ocean is greater than the atmosphere.  There are also two phase changes that can be expected with the oceans, fusion or freezing near the poles and evaporation away from the poles.   I tend to cringe every time the term Heat Sink is used knowing any observations that follow are most likely flawed.

The large thermal capacity of the oceans and lakes is not contained at their surface but rather at considerable depth.  The most stable temperature in the oceans for example is the 4 C thermocline at an average depth of around 1000 meters.  This is below the majority of surface generated mixing which is the reason for its stability.  Properties of water including the maximum density of fresh water at 4C degrees and the temperature of fusion ranging from 0C to around -2 C for salt water with around 35 grams of salt per liter of volume help maintain a fairly stable reference temperature.   In deeper fresh water lakes the 4 C density prevents them from freezing solid by allowing less dense ice to form on the surface insulating the more dense 4 C sub-surface liquid water.

How much heat is contained in that volume is a bit confusing due to the phase change potential.   If it all evaporates it would have to gain 2260 Joules per gram plus about 4.2 joules per degree increase in temperature to the evaporation point which could be lower than the standard boiling point.  For all of it to freeze it would have to release 334 Joules per gram plus about 4.2 Joules per gram as the temperature reduced to possibly -18 C for a saturated salt brine.   A fair SWAG for the effective total heat capacity for the oceans at 4 C average would be about 334 Joules per gram which happens to be equal to the effective radiant energy of a surface at 4 C degrees using the Stefan-Boltzman relationship for an ideal black body.

Typically, the specific heat capacity is used to determine how much energy would be required to change a volume of a substance by 1 C degree which for a gram of water would be about 4.2 Joules.   To raise the entire global oceans by 1 C would require about 4.2(Joules/gram)*1.5 x 10^24 grams or 6.3 x 10^24 Joules assuming no change in the rate of evaporation or freezing takes place in the process, which is unlikely for larger changes in temperature.

The SWAG estimate of total heat capacity may be relevant  to basic Greenhouse Effect considerations since the ocean reservoir effective heat capacity of 334 Joules per gram happens to equal the best estimate of the effective Down Welling Long Wave Radiation (DWLR) felt at the "surface" of the Earth.  DWLR is a bit unique to atmospheric physics.  Most other branches of physics consider the net heat flux not the difficult to manage gross heat fluxes.   While the SWAG may not have an obvious physical meaning, it does at least provide a stable, as in thermal reservoir, frame of reference.


Hopefully some will find this bit of minutia useful.  If you happen to notice any calculation errors, please do not hesitate to comment.

Using CO2 as a Climate Reference

There is still a battle between the extreme pessimist and different degrees of optimist/realists over the impact of Greenhouse Gases, primarily CO2 - Carbon Dioxide "Climate".  Since atmospheric CO2 is one of the factors that we have reasonable good data on, it makes a reasonable good proxy or reference to relate changes in our atmosphere to changes in our "climate".  There are many other factors that can impact "climate", but most have much less recorded data.  There is another issue with what is "climate"? 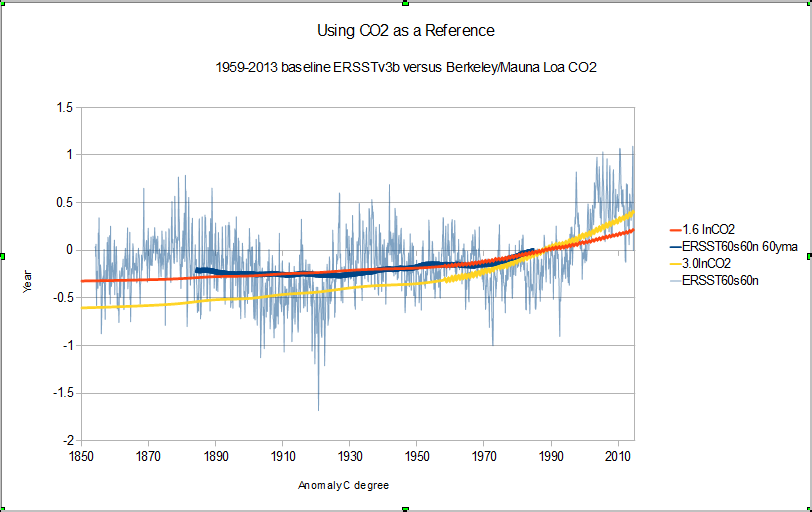 UPDATE: the axis titles are swapped.

Here is a simple illustration of CO2 being used as a reference.  Since the current data should be the most reliable, the baseline for this graph is the Mauna Loa CO2 sampling period from 1959 to 2013 or all the full years, J-D, converted to a temperature anomaly form using the simple ln(CO2/CO2ref) times scaling factors of 1.6 and 3.0.  Since the natural log (ln) of a doubling of CO2 concentration would be about 0.69, the "sensitivity" would be about 1.1 C for the 1.6 scale which is about the no feedback value for CO2 all by itself and 2.1 C for the 3.0 scaling factor which is the lower end of the IPCC estimates for CO2 only.  I could have divided by the ln(2) for a direct relationship to temperature per doubling, but this way people will actually have to read in order to see what the curves mean.  Along with the two CO2 reference curves is the normally ice free ocean area surface temperature from 60S to 60N from the ERSSTv3b SST data set available at KNMI Climate Explorer.  From 1958 to Mauna Loa CO2 data is used and prior to that the Berkeley interpolated data is used.  The ERSSTv3b is shown both as monthly anomaly and in a 60 year moving average assuming 60 year averages can be considered Climate.  This assumption should reduce the tenancy to cherry pick shorter periods that might not be long enough to be called "Climate".

The 1.6lnCO2 appears to match the ocean SST very well for the 60 YMA and the 3.0lnCO2 better match the 1970 to present portion of the SST curve.  Now remember that the CO2 references would also include all the "other" factors, anthropogenic and natural.  The object of this post is to see how pessimists, optimists and realists might interpret this simple comparison.
Posted by Unknown at 9:36 AM 1 comment: