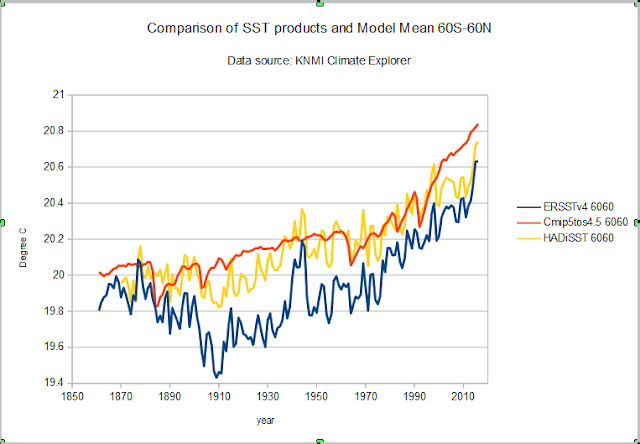 Out with the old ERSSTv3b and in with the new ERSSTv4.  These are ocean temperature products used by NOAA/NASA to determine the rate of "Global Warming."  Once upon a time, HADiSST (British) and ERSST ('Merican) ocean temperature products were pretty close except for the WWII interpretation and a little less warming after 2000. Now with new and improved finesse, ERSST takes the lead as the warmest ocean temperature product EVAH.  In addition to buckets versus engine intake versus satellites versus buoys, different types of measurements that have to be combined by the products, the new version tries to deal with masking (what's ocean versus what's land) and sea ice versus not sea ice issues because ocean isn't ocean all the time.  Many crusty engineering types try to avoid all that noise and focus on the portion of the ocean that actually remains ocean the majority of the time, 60S-60N.  Crusty engineering types are also hung up on actual temperature references and are not fond of temperature anomalies that can be fudged around for effect.  For the oceans, models and temperature products include real temperature estimates, land not so much.

Engineers, who can be sued should they screw up also tend to focus on the largest potential screw ups.  It is in our nature but some of the newer generation find looking for potential mistakes to be stressful and counter productive for career advancement besides, narrative is so much more fulfilling.

The biggest thing that jumps out and grabs an engineer is the area around 1910.  1910 and earlier could be part of the pre-industrial reference period used to determine just how bad human caused warming might be.  The difference between the new and improved ERSSTv4 with sparkles is half of a degree C @ 20 C degrees using the CMIP5 model reference.  CMIP5 is the latest model version of future climate projections.  The half degree temperature difference is approximately 2.85 Wm-2 energy difference or a substantial portion of the estimated human caused forcing related to CO2.

The next thing is the so called "pause".  The pause is the brain child of a British journalist that noted that UK MET (and the Hadley Center, the HAD in HADiSST) predictions of "children will never know snow", promises of barbecue summers and warmer temperatures made in the early 2000s were not being realized in 2014.  Pause isn't a scientific measure or term, it is a creation used for poking fun at failed predictions of world renown experts.  Basically, in the HADCRU product for global mean temperature anomaly there was a lack of warming.  Many in the scientific community noted something similar and called it the stand still, slow down or hiatus in warming.  If you look at the period from ~2000 to 2016 you can see that HADiSST doesn't increase as much as predicted.  For the ERSSTv4 product, the actual temperature of the ocean surface (tos or SST) never catches up with the predicted temperature for the 60S-60N portion of the oceans.

During the battle to eliminate the pause, slow down, stand still or hiatus, some scientists noted that the models of "surface temperature" didn't compare well with observed data used to create a combination of SST and "near surface" temperature measured over land that ranges from sea level to Mount Everest.  "Skeptics" had noticed the problem for some time and started using the area from 60 degrees south to 60 degrees north, because there were few and not very reliable measurements for the polar regions.  Since the ocean make up the majority of the surface, ocean temperature is a lot less variable than "near surface" temperature and the vast majority (~1000 times as much as air) of energy is contained in the oceans.  Using just 60S to 60N is a useful simplification.

Dr. Judith Curry has an interesting post on her blog ClimateEtc. entitled, "Skin in the Game."  The engineering types understand her point because they can be sued, have their licenses revoked and generally be forced out of the profession with a significant screw up.  Climate scientists, especially activists Climate scientists can screw up quite a bit without repercussions.  Possibly because of their lack of skin in the game, they have a tendency to over-sell their work a bit.  Temperature anomaly can be a useful over-selling tool.

Using anomaly, warts like missing half of a degree and 2.85 Wm-2 for the majority of the Earth can be ignored and since the model anomaly was tuned to the period prior to 2007, the discrepancies before and after tuning doesn't attract much attention.  However, the climate system is driven by fluid and thermodynamics that require real, actual, temperatures in order to determine energy flow.  Anomalies are a useful tool in climate modeling, but can be abused by implying a greater sense of accuracy than can be realized, especially when combining temperature anomalies of different things measured different ways at different times.

Over-selling accuracy and under-selling uncertainty is a tactic to inspire policy and unite the masses around a common cause.  It gets good press essentially, that is dramatic and compelling.  Just like miracle cures and gadgets sold on late night TV, listing down sides tends to cut into sales.  You need that irritating Sham WOW! kind of presentation to make headlines in this internet age.

The biggest problem for the over-sellers is that climate science is evolving, so something you sold might end up being obsolete, then you have to un-sell.  Your demographic includes activists and radicals who are more cause oriented than most and can be extremely inflexible.  If you have over-sold the catastrophe of using ANY form of fossil fuel and suddenly find much cleaner natural gas that can alleviate human suffering with less environmental impact while searching for the ultimate "solution" you have screwed the pooh, to use colloquial NASA terminology.  Now you have to find some rational way to chill out people that aren't known for being rational or chillin'.  When you say things like the "the coming climate catastrophe and our last chance to save humanity" there are some that will find that fits their favorite end of days theory.

However, life and nature have a way of leveling playing fields and hoards of end of days believers can create ways to get your skin in the game.  Be careful out there, hear?
Posted by Unknown at 6:53 AM No comments: