I have been messing around with the physics side of the Global warming issue for a while and things don't add up the way I would think. CO2 has a radiant and conductive impact on the physics of the atmosphere, but neither can manufacture energy on their own. So I started looking into land use changes. Land use could allow more energy to be absorbed and less reflected. The chart above is on the tree ring reconstruction by Jacoby et. al 2006 from samples taken from the Taymir or Taymyr Peninsula in Siberia. Jacoby et. al consider this to be a temperature reconstruction. Temperature plays some role in tree growth, but general tree rings are an indication of growing conditions. Jacoby et. al mention that after 1970, the temperature stopped indicating temperature, so the series ends in 1970. This is the divergence problem that is pretty well known, I would have preferred that they left the final years of data in place, but I am too lazy to go tracking that down.

I plotted only the raw reconstruction data, no smoothing. As I have been known to say, most of the data is in the exceptions or anomalies, not in the smoothed data. Here you can see it in its noisy glory.

I will try to get a cleaner version to show that beginning in approximately 1820, the slope of the noise increases in the positive direction considerably more than the overall slope which is slightly positive. The reason I point this out is the invention of the steel plow.

The Taymyr tree ring reconstruction may indicate that agricultural expansion started the warming we now notice with much better instrumentation. Quite a bit of uncertainty, but enough correlation to be interesting. The biggest indication in the tree ring reconstruction is the decrease in the duration of extremes. Temperature will fluctuate, but cleared farmland is valuable and farmers will find a way to get as much in production as early as possible. So in spite of all of the noise in the data, climate appears to be growing more stable. That is an interesting contradiction of the Global warming theory, if true.

This is a very busy chart of the Taymyr data: 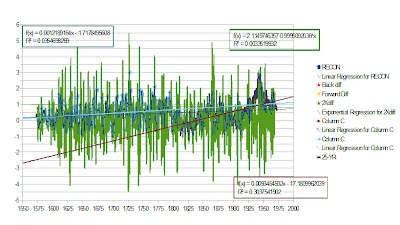 There are three regressions added. The light blue, hard to see since there is little change, is the pre-agricultural linear regression. The red is the agricultural regression, starting at approximately 1814. The green is a power regression of the nasty looking green noise.

The nasty looking green noise is double the annual change. It is doubled to make it stand out. All it is, is the year plus 1, minus the year, doubled. The slope decreases slightly over time. I will try to locate the signal processing brain cells I misplaced during the late 70s and plau with some nifty filters. For now there is a 25 year average buried in the business of the chart.

I may take Tonybs CET and attempt a splice of instrumental to Taymyr tree rings :)
Posted by Unknown at 7:15 PM