Every since the ARGO system has been in place the missing heat disappearing into the deep oceans has cropped up.  The ocean heat content change is one of the most questionable of all climate data sets.  The huge change in energy in 10^22 Joules is based on sparse measurements of vertical temperature, pressure and salinity over several various data acquisition types.  Pretty much a hodge podge of methods spliced together with some serious statistical approaches.

I have said before that I am pretty impressed that the data looks as good as it does, but I am not all that convinced that the error ranges are all that accurate.  Because of the "almost unbelievable" certainty, any adjustments will likely be small in order to not embarrass previous guestimators. 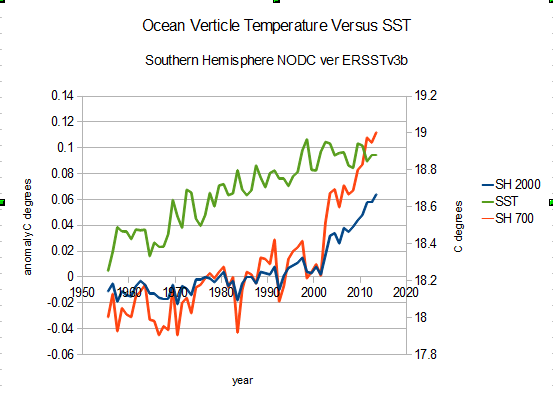 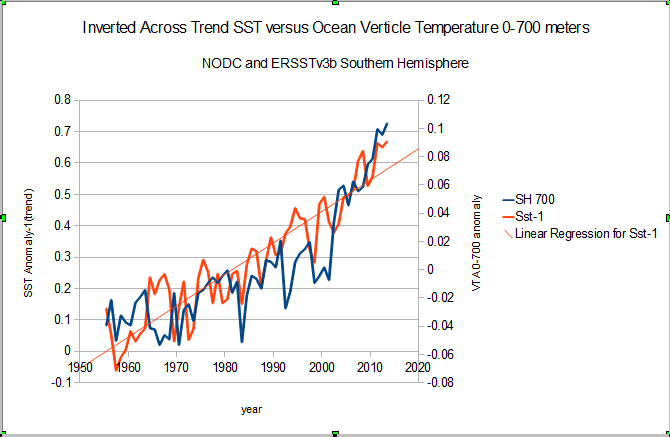 If I invert the SST across it's trend line you can see how well they match up.  When the SST cools or stays neutral, the deeper ocean warm a little.  Nothing particularly shocking about that, changing the surface winds and currents changes the efficiency of the mechanical mixing efficiency some like to call eddy diffusion rate so for this chart about 0.6 C of surface temperature increase produce about 0.14 C of warming in the 0-700 meter ocean layer.  Should all things remain equal we might expect about 25% of the warming to be sucked up by the oceans. 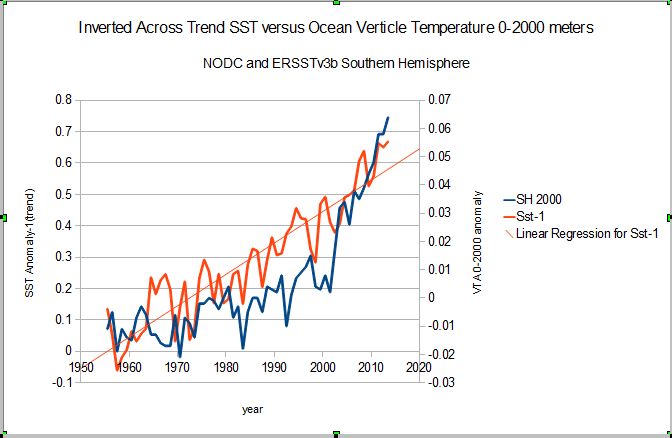 If I compare to the 0-2000 VAT my correlation isn't quite as good.  That might be the way things are or then again since ARGO only started around 2003, it might be due to a bit of wicked instrumentation change force fitting.  That would be a fairly steep leap in 0-2000 meter temperature between 2001 and 2013 wouldn't it?  Almost unbelievable.  Since the energy to warm the deeper oceans had to come from somewhere, I would think there would be a better fit.  Perhaps not, but one, 0-700 meters appears to make more sense than the other 0-2000 meters and there is a reason to question the 0-2000 meter data, very little existed prior to 2003.  As they say, if sounds too good to be true it probably is.