Why is Volcanic Forcing so Hard to Figure Out?

I have a few posts on volcanic forcing and it is very difficult to nail down what is due to what because Solar and Volcanic tend to provide mixed signals.  As far as Global Mean Surface Temperatures go, there is a short term impact some of the time that is easy to "see" but at times volcanic response tends to lead volcanic forcing which you know just cannot be true.  The problem is multifaceted.

First, there are internal ocean pseudo oscillations that are amplified in the NH and muted in the SH.  The SH really doesn't have any room on the down side to have much easy to spot volcanic response and thanks to the thermal isolation of the Antarctic, not much of an upside.  There is a response, just temperature anomaly doesn't do it justice. 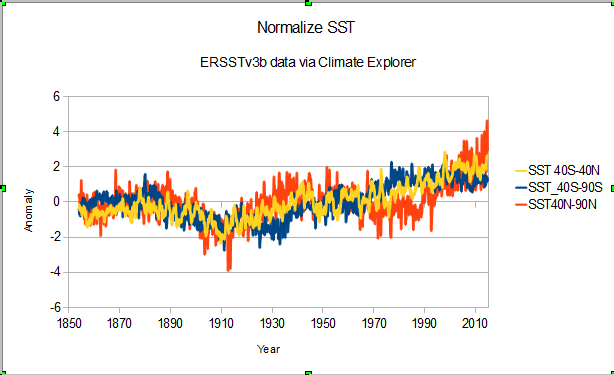 However, if you normalize the anomalies by dividing by the standard deviation you can "see" that both higher latitudes, above 40 degrees and the bulk of the oceans 40S-40N have similar responses.  Since the NH has land mass choking the pole ward flow, it has a larger fluctuation, but about the same longer term trend.  Temperature in this case, especially anomaly based on "surface" temperatures doesn't accurately represent energy change.  This gets back to Zeroth Law requirements that the "system" a fair size planet, should be somewhat in equilibrium.  A simple way to see that is a 10 degree swing in polar winter temperatures would only represent about a third of the same swing in the bulk of the oceans.  Around 40 degrees to the poles, the surface has more energy advected from the bulk than provided by solar.  Since advected energy is as or more important than solar, volcanic forcing reducing solar irradiance has less impact.

Second, due to Coriolis effect and differences in land mass, you will have ocean oscillations.  I have previously mentioned that there are three major thermal basins, North Atlantic, North Pacific and Southern Hemisphere with ratios of roughly 1:2:4 which can produce a fairly complex coupled harmonic oscillation.  Since sea ice extent would vary the amplitude, especially in the NH due to land amplification of advected energy, you can just about drive yourself nuts trying to figure out cycles.  Yes, I know that ocean oscillations are a part of both of these reasons.  That is because they influence surface temperature both ways since in addition to providing energy that energy drives precipitation that can produce snow that can reverse the "surface" temperature trend.  In the first case, advected energy offset volcanic forcing and in this case, advected energy causing increase snowfall can enhance volcanic forcing. 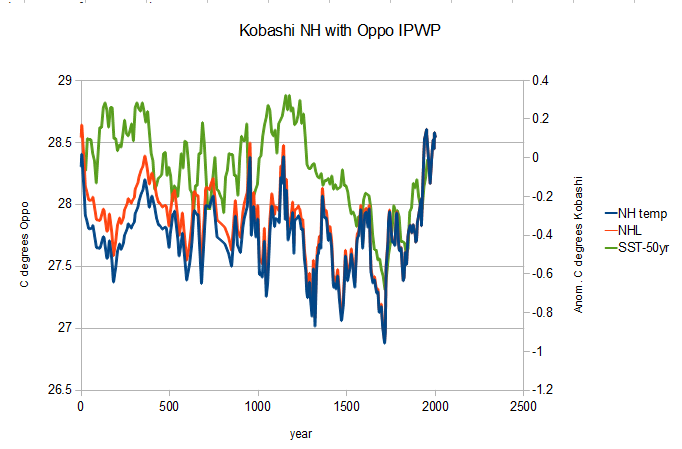 To illustrate, this chart compares the Northern Hemisphere and northern high latitude temperature reconstruction by Kobashi et al. with the Indo-Pacific Warm Pool reconstruction by Oppo et al. that I use frequently.  While I cannot vouch for the accuracy of the reconstructions, they should reasonably reflect the general goings on.  The Kobashi reconstruction doesn't have a pronounce Medieval Warm Period since that is more a land based phenomenon, think less glacial expanse, and a less obvious but longer Little Ice Age since land based ice doesn't have much impact on ocean currents other than more sea ice/ice melt can cause impact the THC.  Solar and Volcanic impact on the ocean heat capacity would be a slow process requiring up to 300 year per degree with an average forcing of around 1 to 2 Watts per meter squared.  Impacts felt in the SH may take 30 to 100 years to migrate back to the other hemisphere producing those delightful pseudo oscillations we have all grown to love.  So "natural" variability can cause more "natural" variability since the original forcing can't be sorted out.

In the NH which is more greatly influenced by the oscillations, volcanic forcing on an upswing might have no discernible impact while on the downswing it might have a larger than expected impact.  Add to that potential impacts of volcanic ash on snow melt which would be affected by the the time of year and general atmospheric circulation trends and you have some serious job security if your employer has the patience.

Finally, the southern hemisphere temperature records generally suck big time.  That is simply because the winds and temperatures that work so well isolating the Antarctic  are not all that hospitable for folks that might want to record temperatures.  That means that early 20th century correlations are not reliable.  So there might have been more out of phase situations, the hemispheric "seesaw" effect, that would help determine actual "cause" of some of the fluctuations.

So what does this all mean?  Glacials and interglacials are due to glaciers, ice on land.  They are the number one climate driver so when there is a lot, the climate is more sensitive to things that melt ice and when there isn't much, climate is less sensitive in general.  Since evidence suggests that more ice is more common you can have a lot of climate change without much ocean energy change.  If you want to reconstruct "surface" temperature you need to reconstruct glacial extent.  If you want to reconstruct ocean temperatures, stick to the bulk of the oceans especially the tropics.  Since the Indo-Pacific Warm Pool has lower THC through flow, it would be your best spot for estimating the energy changes in the "global" oceans.

That said, the average temperature of the oceans is about 4 C degrees which happens to be about the "ideal" black body temperature of a rock in space located about Earth's distance from our sun.  Based on that temperature, "Sensitivity" to a doubling of CO2 would be about 0.8 C "all things remaining equal".  4 C by the way is roughly an ideal black body energy of 334.5 Wm-2 which is roughly equal to the best estimates of down welling longwave radiation and since Stefan-Boltzmann included that ~0.926 fudge factor, "normal" DWLR could be between 334.5 and about 360 Wm-2. 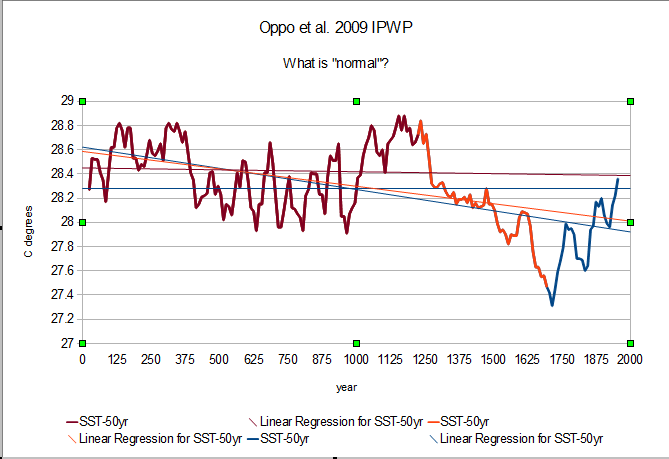 If the Oppo et al. 2009 reconstruction is reasonably accurate, then Earth's climate is about "normal" for the past 2000 years, unless you think the Little Ice Age should be "normal".  In any case, things should start slowing down now that climate is closer to the back half of the Holocene mean. 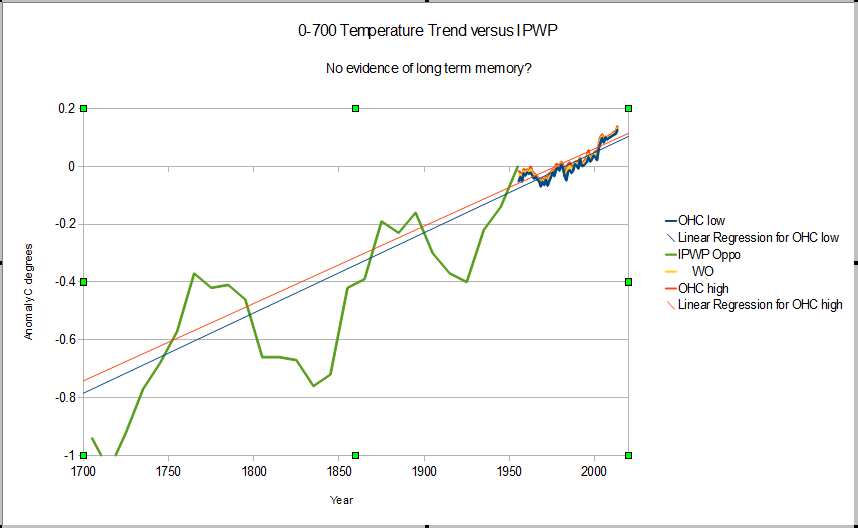 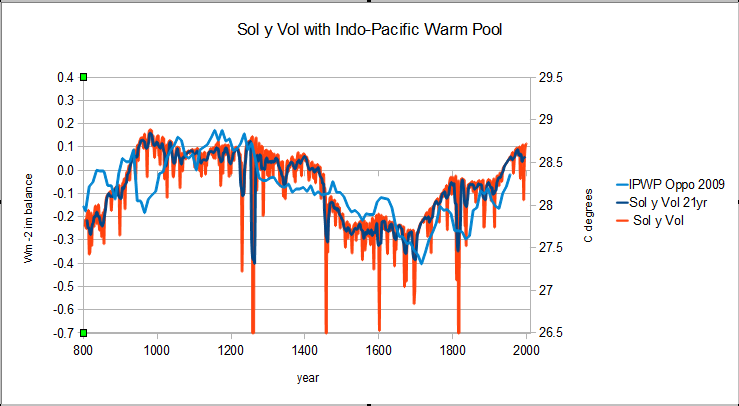 To conclude, trying to determine "global" changes in average SST using higher latitude data tends to remove information if the hemispheric "seesaw" is not properly considered and logically the majority of ocean heat should be better represented by the bulk of the oceans of which the Indo-Pacific Warm Pool is a good representation.  To say that there is no evidence of long term persistence/memory in the vast oceans is a bit comical.