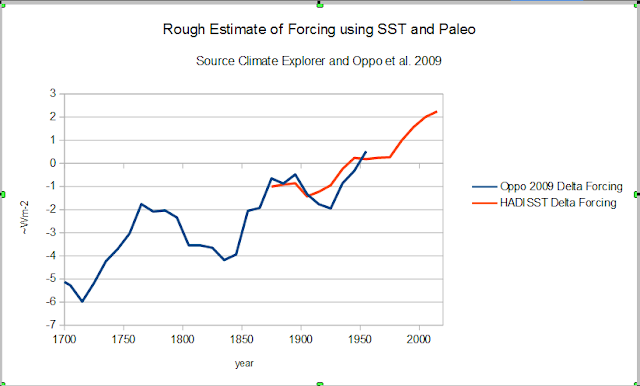 This is one of those "if only" kind of posts.  If only, climate science wasn't so set in its ways, this could be a great idea.  A Teleconnection, or a particular geographical location that has a high correlation with "global temperature anomaly" is a tool used and maybe abused by climate science.  For example if the wiggles in a group of tree rings from California happen to correlate well with what is assumed to be an accurate interpretation of what "global" temperature anomaly wiggles are likely to be, the California tree rings get more consideration than some place else.

Since we are currently in one of the large El Nino event influences and El Nino has a pretty good correlation with warming, the higher than normal rainfall you would expect in California should be a pretty good indication of past climate.  The real key isn't California, it is El Nino and the ENSO cycle.  So you could just blow off California trees and use any trees, sediments or anything else that is a proxy for ENSO.  Since the Indo-Pacific Warm Pool (IPWP) is the hot side of the El Nino region, it is just as good as anything else.  This is why Oppo et al. and team young guns devote so much time to the IPWP paleoclimate and even try to estimate "global" ocean heat uptake over the past few thousand years.

The young gun's data differs than some, i.e. Michael Mann and the old farts, most likely because ocean paleo has a more reliable range of temperature dependence than trees that prefer a Goldilocks range of temperature, moisture, nutrients and pests.  Mann though had a head start and proclaimed California trees the cat's ass before the young guns were out of diapers.

The much publicized "divergence" problem is the Goldilocks tendency of trees most likely.  That doesn't make tree ring useless, they were originally proxies for rainfall and that is a big part of the El Nino signal, so they have a reason to be included in the debate.

The neat thing about ocean paleo is that there is a real temperature involved.  Instead of just matching wiggles you have temperature and wiggles.  When you have temperature you have a rough idea of the effective radiant forcing.  There is more involved, but radiant forcing as used by Climate Science is a large percentage of the combined, latent, convective and radiant reality.  Since the ocean rate of heat uptake tends to control or regulate temperature, the young  guns can use absolute temperature below the surface which doesn't include latent and much convective to get a reasonable indication of heat uptake and the real energy involved.  Since SST and ocean heat uptake correlated extremely well, they would also correlate reasonably well with the forcing required to change the rate of heat uptake.  Since the biggest difference between the young guns and da Mann are "pre-industrial", there is a pretty good bit of money riding on the winners.

Neglecting uncertainty for the moment (hey, at least I admit it), the young guns IPWP reconstruction indicates there has been about 8 Wm-2 of radiant forcing change since 1700 AD.  Combined "global" forcing change is estimated to be in the 4 Wm-2 range or about half of what this rough proxy indicates.  There is a big kerfuffle over this half issue.  Some of the forcing has to be caused by man and since fossil fuels are easy to estimate, they are to no brainer "cause".

I happen to be a bit of a rebel and think there is more to the story, land abuse, which should mean that warming started well before fossil fuel abuse.  There are lots and lots of "potential" land abuse factors that are close to impossible to sort out. You just need one to provide a hook, but if you pick the wrong one, the hook will end up in your butt.  Use bunches of potential land abuse factors and the simplifying simpletons will eviscerate you - gut you like a fish. :)  That sucks, because the real world is complex, but there are a few hooks that are more interesting than others.  Formosan Subterranean Termites may be a pretty good hook.  More interesting meaning likely more significant and easier to sort out.

Subterranean termites are a new world invasive species.  Since they are biological, they have a nice exponential growth curve until they reach a population peak.  The termites eat woody stuff which releases CO2 and CH4 from what was a "natural" carbon sink, decreasing the efficiency of that sink.  If you are a bit anal about sinks and sources versus natural and anthro, you might have to consider that a natural mechanism in an unnatural environment for them would pretty much have to be unnatural.  "Globally" all the natural sinks would be still sinking but you have half a hemisphere that isn't hitting on all eight.

There are still a lot more anthro land abuse impacts that would have an exponential curve, but the termites might be testable.  A systematic invasive termite eradication program would at least stop the population growth of termites allowing the sink to to operate more efficiently.  There are also a number of invasive pests that contribute to more woody matter for the termites to munch on that could be targeted.  Of course none of this will be taken seriously as long as demon coal and fossil fuels get all the press, but increasing land carbon uptake by a fraction of a percent would offset nearly all of the fossil fuel emissions.  I may toy with this approach in the future.
Posted by Unknown at 8:57 AM