The War on Science!

The NOAA ERSST temperature product is still hot news.  John Bates, the NOAA whistle blower, has outed himself and contends that NOAA didn't follow procedure.  Procedure is pretty important in government service and since the NOAA historic ocean temperature product is liable to be around for another one to two hundred years, revising history can be a problem.

The Hadley Center in the UK also produces temperature products using different methodology, so theoretically, these are two independent temperature products.  As time goes by, more and different means of determining temperature "globally" come to be and if everything works out as planned, the new "history" will complement the "old" history unless there is some exceptional discovery of screw ups, accidental or intentional.  So maintaining an accurate archive of data and methods so that 23rd century scientists can use 21st century data which includes 19th century data can understand exactly what the hell went on is the noble goal. 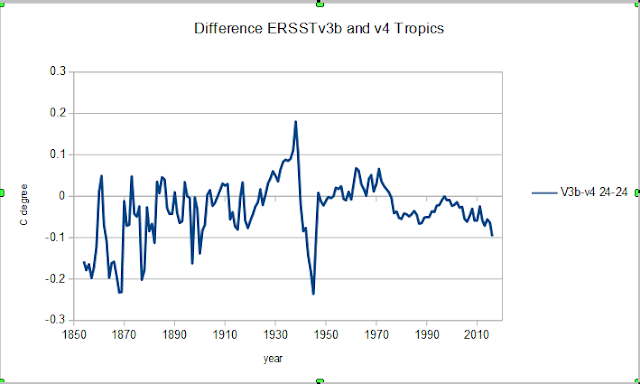 Global tends to get the focus because of politics.  The polar regions with sparse data gets a lot of attention because sparse means uncertain, new products should reduce uncertainty in these poorly covered areas.  The tropics should be close to rock solid, so any new version should have very little impact on the historic record in the not sparsely cover areas like historic trade routes.

Above is the difference between the new and improved ERSSTv4 and the formally cutting edge ERSSTv3b.  Something appears to be wrong when there is 0.4 C difference peak to valley reducing to near perfection at the point highlighted for political purposes, 1950 to 1999, pre-"pause" being compared to 2000 to 2015 post "pause."

In typical back patting and cover your ass fashion, defenders of the science steer the debate towards the most modern portion of the historic record and avoid discussion of the real issue of the integrity of the historic record as a whole.  "Fixing" part of the record to the detriment of the rest of the record without explaining or even recognizing the difference appears to be evasive.  Evasiveness in politics is normal, in science, not so much.

Asking what the fuck happened to the rest of the history isn't declaring a war on science, but evasiveness can lead to war.
Posted by Unknown at 5:40 AM