I doesn't matter how elaborate a model you build of the atmosphere, if you can't verify it with data it won't fly. When you have so much data with so many conflicts and you are looking for extremely small changes, you may need a model just to determine which data is meaningful and which leads down a rabbit hole. So this is a first attempt to generate a little different twist on the satellite data to help isolate issues with the different data sets.

The Aqua data is short and has gaps. The data started in 2002 and is current, but the channel 4 data bit the dust and there are gaps in the other channels. The data is in degrees Kelvin for different atmospheric pressure levels. Channels adjacent to each other likely have some error due to proximity, so leap frogging one or more channels should reduce that error. This is a chart for channel 5 the 600millibar layers (approximately 4.3 kilometer altitude) and the 50 millibar layer, (approximately 50 millibar). 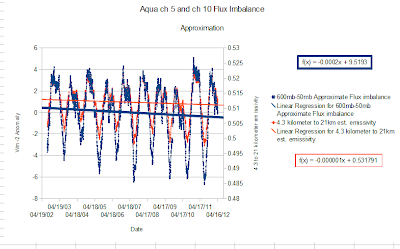 On the chart, the blue curve is an approximation of the flux imbalance between the two layers. By converting the temperature value of each layer into perfect black body flux values using the Stefan-Boltzmann relationship, the subtracting the channel 5 flux equivalent from the channel 10 flux equivalent. This was then modified to an anomaly by subtracting the average of the entire range from the daily values. Where there are gaps in either data set, those days are left blank and skipped in the plot. The orange curve is an approximation of the emissivity for the ch. 5 600 mb layer to the ch. 10 50 mb layer. This plot uses the right y axis scale. The calculation for the emissivity is flux equivalent of the ch 10 data divided by the flux equivalent of the ch. 5 data.

The emissivity of a perfect gray body should approach 0.5 unless my estimates are completely screwed up. Deviations from 0.5 should indicate that energy is converted into work, passing through the medium without interaction, being transported by other than radiant means, or something is wrong.

The limited data indicates that the emissivity between layers is above 0.5 and slowly approaching a value closer to 0.5 and that there is a fairly large seasonal swing in the flux difference between layers with than difference reducing with time. Warmer years have higher positive values. with the average reducing, that would indicate that at least for the short term that there will be some reduction in the average temperature of the 600mb layer. The fit of the two curves is very close since they are based on the same flux relationship. There is some interesting difference in the peak and valley correlation. At the peak, both the estimated imbalance and the emissivity plateau at the same relative locations. In the valleys, emissivity decrease reduces faster than the estimated flux imbalance. This may indicate that convective cooling is taking a larger role relative to radiant cooling at or below the tropopause. The valley difference may indicate a return to radiant control of cooling in the media between the two layers.

The change in the estimated emissivity is most interesting. Changes in the minimum local emissivity due to mixed phase clouds, primarily in the Arctic, cause considerable uncertainty in the energy budget estimates. With more complete data, (using surface to 150mb and other AQUA channels) plus a longer data series, better estimates of the impact of minimum local emissivity variation may be determined.

The data used was taken from the Discover AQUA site and transferred to a spreadsheet. There may be errors in the charts due to transcription errors or brain farts. The purpose of the chart is just to show a potential application of the AQUA data for atmospheric physics hobbyists.

This chart compares the approximate emissivities of the 600mb channel 5 to the higher channels up to channel 11 at 25 kilometers and 25 millibar. If Channel 4, the lowest troposphere level were available it would have the highest emissivity value. These are relative emissivities which could easily be called transmittance. Each higher layer transmits less of the emission from the channel 5 layer. So if channel 5 emits 300Wm-2 and channel 10 emits 100Wm-2, 100/300 would be .33 or the amount of channel 5 energy emitted by channel 10. Two thirds of the channel 5 energy may be emitted to space. Of course, all the energy from the higher layer need not originate at the channel 5 layer, portions could be due to short wave absorption in the atmosphere above channel 5. However, the channel 5 layer is moist an likely close to the maximum radiant layer. There is only a short section of the channel 4 layer, but I will dig that out for a comparison.
Posted by Unknown at 10:55 AM