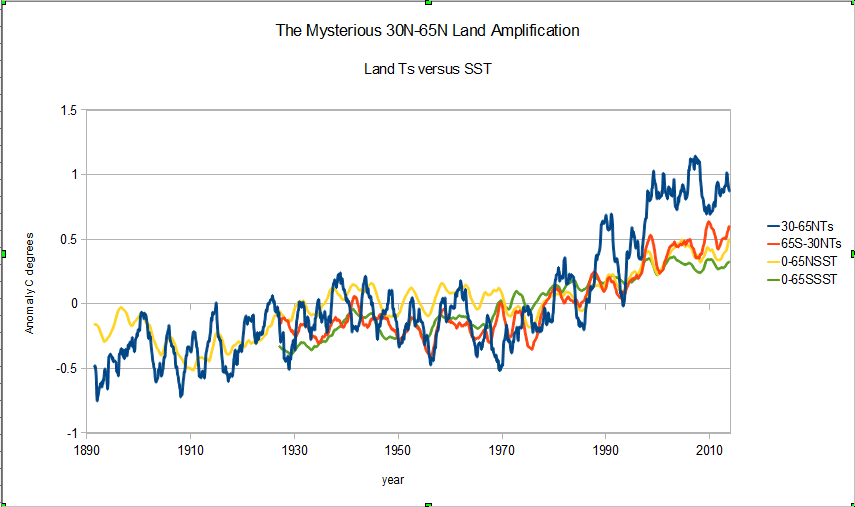 I notice the odd land amplification in the Northern Hemisphere between latitudes 30 and 90 North a long time ago.  The Berkeley Earth Surface Temperature project pick up on it but by and large it is pretty much ignored.  Originally, I was pretty certain it had to be due to land use and/or surface station impacts due to land use, but there isn't really anyway that I have found to make a convincing case.  So it is still a mystery to me.

In the chart above I tried to highlight the situation.  Excluding the poles since the SH coverage really sucks, all of the globe pretty much follows the same course.  The highly variable region from 30N-60N really makes a jump with the 1998 El Nino.  It looks like it tried to jump prior to Pinatubo, but got knocked back in line for a few years.  Southern Hemisphere and equatorial land temperature don't even come close to making the same leap.

The RSS lower troposphere data makes a similar leap but with about half the amplitude.

Berkeley Earth Tmin makes about the same leap though Climate Explorer picked a different scale.  That should reduce the chances that it is a UHI issue.  Even though there are some issues with Tmin, a land use cause should have more Tmax influence than Tmin if it is albedo related in any case.  That could also put Chinese aerosols out of the running.

Playing around with the Climate Explorer correlation option, the amplification seems to correlated with the growing season so it could be related to agricultural land use or the more variable vegetation related CO2 swings.  DJF have the worst correlation which for this time frame, 1979 to present would be consistent with the change in Sudden Stratospheric Warming events and greater Arctic Winter Warming.  Climate Explorer has limited series for their correlation option and I haven't attempted to upload any of my own yet.


So there is still a mystery there for me.  This post is just to remind me of a few things I have looked at so perhaps I will stop recovering the same ground and possibly inspire some insomniac to join in on the puzzle.
Posted by Unknown at 3:42 AM