Constantly being updated aka a work in progress

I am probably going to never finish this because it is really a waste of time, but there are a few interesting things about the Paleocene-Eocene period.  This is inspired by a CO2 done it versus the impact of plate tectonics on climate smack down at And There is Physics which tends to devolve into an there there is bullshit when the usual suspects get involved.

First there was no glacial area of any significance.  The "high" plateaus by and large didn't exist and since there was no Antarctic or Greenland ice mass there is a significant lapse rate issue because the PETM "surface" doesn't compare easily with today's surface.  The Antarctic would be nearly 30 C degrees warmer just due to the lower altitude.

The atmospheric CO2 during the PETM was close to 1200 ppmv and assuming just the no feedback sensitivity the temperature should have been 2 to 3 degrees warmer than preindustrial depending on what values you like for initial condition and "benchmark" forcing.

These are pretty basic issues with the "Global Mean Surface Temperature Anomaly" being used as an "index".  Since there are huge differences between today's surface and the likely surface 55 million years ago you have a apples to oranges situation that requires a lot of consideration.  Even the elevation of the ocean surface was different enough to consider nearly half a degree of cooling caused by lapse rate.

The lack of ice covered poles, reduced average surface elevation and reduced land surface area would nearly eliminate polar/land amplification.  Since I saw one poster that confidently stated that PETM temperatures were 16 C warmer than today but noted that ocean temperatures were only about 5 C warmer, that would indicate that land temperatures were close to 50 degrees warmer, however the tropics appear to have only been one to two degrees warmer.

Interestingly,  the deep oceans had the greatest warming (Kenneth and Stott 1991) and species extinction events were limited to the deep oceans for the most part.  Today, the deep oceans are below 4 C degrees due to more dense cold water sinking near the poles.  That would change should the Antarctic Circumpolar current stopped since that is the primary source of deep ocean water.  Losing that cooling feature by itself would cause a 3 to 4 C rise in average ocean surface temperature.  Without some means to mix the oceans you would not have a significant temperature gradient moving poleward so the oceans would be in a sort of permanent El Nino condition.  With the deepest ocean temperatures above 4 C, the maximum density temperature of fresh water, you would have less of a thermocline that is an important feature of today's ocean thermodynamics.

As I mentioned before one of the largest sources of uncertainty is the exact placement of the land masses and potential gaps for ocean circulation. The simplest explanation for the rather abrupt change during the PETM would be plate tectonics closing and then opening a minor ocean gateway and the associated marine volcanic activity that would likely be a part of that process.  However, we are dealing with selective use of Occam's razor and optimistic force fitting of pet theory. 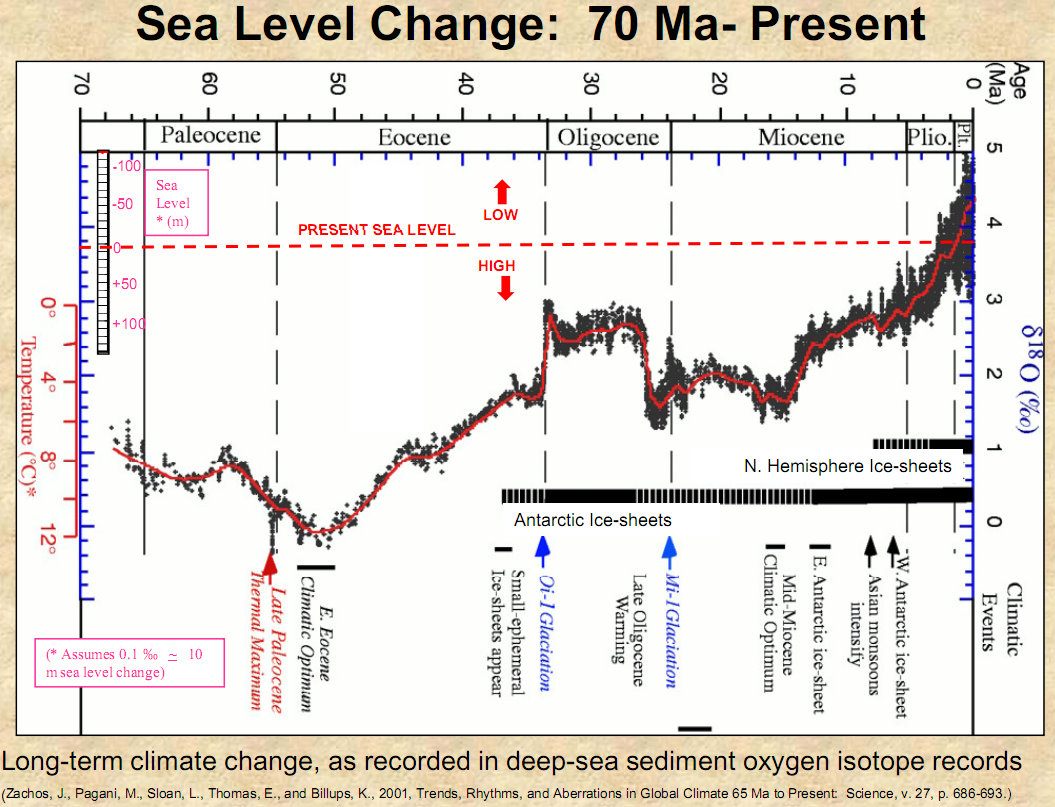 This chart borrowed from Zachos et al. 2001 has a lot of information, note though the orientation.  Since 55 million years ago is a fairly long time relative to actual instrumental of up to a few hundred years, we are comparing tenths of degrees and mm per year to tens of degrees and meters.  That is what we have to work with so here we go.  IF all land based ice melted we could experience 50 to 70 meters of sea level rise.  According to this chart the PETM sea level might have been 200 meters higher than that.  The PETM temperature spike was about three degrees and only about one degree higher than the Eocene maximum.  Today, sea level rise is a bit debatable even with current state of the art measurements that allow for rising and falling of land mass and it is accepted that 55 million years ago there was a great deal variation due to tectonic plate movement that appears to be several order of magnitude greater than today.  If the data used for this chart is reasonably accurate, either billions of tons of water vapor were lost to space or the average elevation of the land mass varied by a 100 meters or so without the benefit of melting ice mass.

A proper theory should explain everything.  Rapid changes in plate tectonics that would up lift land mass and increase the average depth of the oceans while releasing energy to the deep oceans while plates drift apart would kill a number of birds with one stone. Deep ocean warming greater than surface warming would be related to geothermal energy and convective mixing induced by volcanic activity.  Methane and carbon dioxide along with sulfuric acids would also be release in large amounts, ocean currents could easily reverse direction and you would have a reduction in sea level relative to land elevation without land based ice accumulation.  I am not going to attempt to go into great detail and try to make estimates of the impact because the data available is much too coarse for anything meaningful.

One of the problems with the data is that CO2 is to a certain extent estimated based on temperature and ocean pH making that circular and another is the dating uncertainty in the range of +/- 9,000 years that makes impossible to determine timing of CO2 rise relative to sea level and temperature.  Because of these you cannot eliminate potential cause you are stuck with the preponderance of evidence situation where in my opinion, tectonic activity has an advantage.

That tectonic activity could have been influence by an impact event, by CO2 mega forcing, by orbital instability, internal core dynamics or any combination, but if the data available is accurate, obviously there had to be huge changes in the configuration of land mass in three dimensions.

If you pick any single "cause" you are subject  theory bias meaning you should be your own toughest critic.  Unfortunately, with "post modern" science you can not include any number of issues much like a lawyer in court forcing you critics to waste time you should have devoted to your own research.  In Redneckese that is half-assed science.

Plate Tectonics and Climate Change by DeConto at the University of Massachusetts has a more formal discussion on all the issues.  Of particular note would be the ocean dynamics:

"Because changes in the physiognomy of ocean basins and/or the opening or closure of gateways alters both the winddriven (surface) and density-driven (deep) components of the ocean’s meridional overturning (Bice et al., 1998; Poulsen et al.,2001), it may be reasonable to assume that tectonically-forced changes in ocean circulation can have profound climatic consequences (Covey and Barron, 1988). Conversely, theoretical arguments suggest the potential effects of ocean circulation
on total poleward heat transport are inherently limited. It has been hypothesized that the total energy transport by the atmosphere-ocean system remains roughly unchanged, so if the efficiency of either the atmosphere or ocean is reduced, the other compensates (Stone, 1978). Furthermore, ocean heat transport is proportional to the product of the temperature change and mass transport of water advected into a given region. Thus, the ocean’s potential to transport heat would have been limited during times in the past when the temperature difference between low and high latitudes (and surface and deep waters) was much smaller than today, such as during the Cretaceous and early Eocene (Hay and DeConto, 1999; Sloan et al., 1995). "

Oh, I have to add the concluding paragraph: "Lastly, while tectonic processes are usually associated with slowly evolving environmental change, there are important exceptions. Volcanism’s essentially instantaneous effect on the atmosphere provides one example. Less obvious is the climate system’s potential to respond non-linearly to the most gradual tectonic forcing, with sometimes sudden and extreme consequences. Thus, plate tectonic processes should be considered a potential climate forcing mechanism on all timescales."

My interests mainly reside in the ocean and ocean dynamics since I am after all a fishing guide.  The oceans do produce a number of pseudo cyclic patterns that impact my catch and due to sea level variations certain depths that correspond to ancient shorelines are more productive that others.  So if anyone needs a reason for my apparent bias towards oceans, there ya go.