I may seem to pick on Marcott et al. 2013, but that paper came out while I was playing with ocean paleo-reconstructions in the tropics.  Marcott used a number of tropical paleo reconstructions that I didn't use because they were too coarse (ultra low frequency) and had a unknown uncertainty in the samples.

The unknown uncertainty is "natural" averaging.  Most of the proxies are based on plankton of some sort and the biological temperature proxies would go through boom bust cycles.  You can have more depositing of a particular type of plankton during either.  So if you have a core sample say one inch thick that spans say 300 years, one particular good growth period would dominate the sample or one massive die off could.  The published accuracy of the sample is based on how well a lab can count something not how well biological life fits a normal distribution assumption. 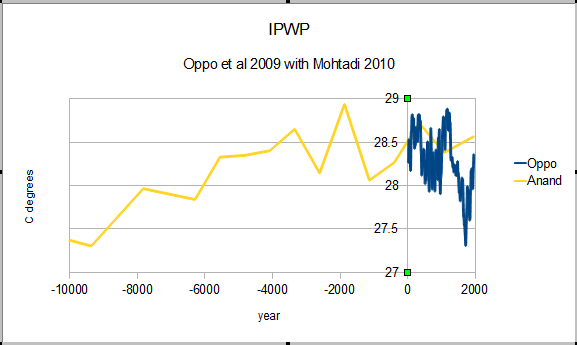 At the time I was using the Oppo et al. 2009 and the Mohtadi et al. 2010 aka Anand on the legend was the low frequency reconstruction I didn't use.  There is a large difference between the two, especially near the end.  The lower frequency reconstructions have more uncertainty in dating which is pretty well know plus the natural averaging of the samples isn't known and the impact isn't discussed as far as I know.

Most of the criticisms of Marcott, Mann and other paleo re-constructors deal with just about everything other than the "effective" averaging produced "naturally" by the organisms and unintentionally by "novel" methods.

My curiosity might be misdirected, unfounded or irrelevant, especially since I am a Redneck and not a part of the "scientific" establishment, but since just about every higher resolution "cap" reconstruction diverges from lower resolution reconstructions, I am a tad stubborn about wanting a few answers.

It is a bit frustrating to me since in Redneckville such an obvious issue would dealt with something profound like, "What the F__ is going on!" but in climate scienceville some dweeb starts babbling about standard error when this is pretty much a non-standard situation :)

Technically, the error is only about a degree or about equal to the estimated amount of warming during the instrumental period and you can massage or polish all you like, but the result should always consider the absolute magnitude of the potential error if it is never specifically addressed.  In order to reduce the error you have to do more digging and less assuming.  It is very unlikely the error is "normally" distributed uniformly over the entire time frame of the reconstruction which is part of the assumptions made to get those unbelievably tight error margins in the published literature.