Increase in surface temperature versus increase in CO2

All models have limits but since the believers are familiar with MODTRAN it is kind of fun to use that to mess with their heads. 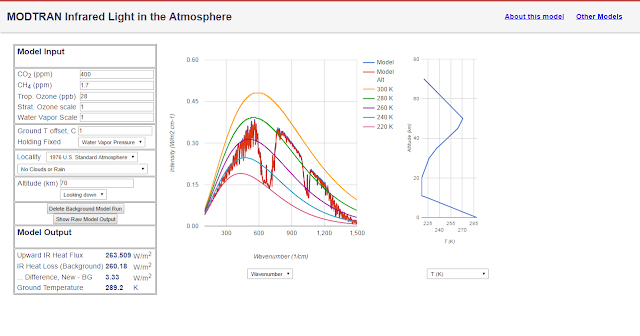 This shouldn't be a shock, 3.33 is the "benchmark" for 1 C change in surface temperature and even though the actual surface energy would have increased/decreased by about 5.45 Wm-2, the TOA change would be about 3.33 Wm-2 or about 61% of the change indicated at the surface.  While MODTRAN doesn't provide information on changes in latent and convection, the actual increase in surface temperature for 5.45 Wm-2 at some uniform radiant surface would be about 0.80 C degrees.  Because of latent, about 88 Wm-2 and convective/sensible, 24 Wm-2, a 390Wm-2 surface would actually be "effectively" a 502 Wm-2 surface below the planetary boundary layer (PBL) and the more purely radiant surface would be above the PBL and at roughly 390 Wm-2.  This should not be confused with the Effective Radiant Layer (ERL) which should be emitting roughly 240 Wm-2. 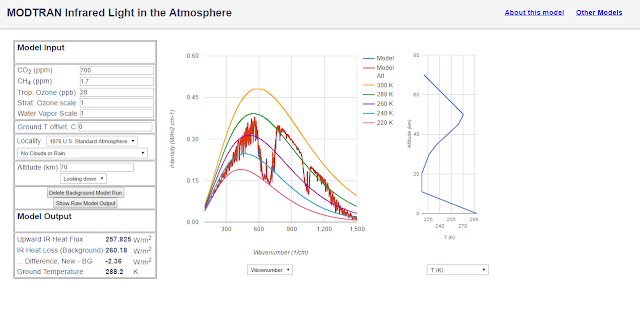 Since someone asked what increase I would expect for 700 ppmv CO2, this run shows a decrease of 2.36 Wm-2 which is obviously less than the "benchmark" 3.33 Wm-2 in the first run.  If you use the iconic 5.35*ln(700/400) you should get 2.99 Wm-2 decrease.  MODTRAN indicates only 78% of expectations.  Again, there should be some change at the surface required to restore the imbalance, but you have the latent and sensible issue at the real surface and you have a bit of a struggle defining what "surface" is actually emitting the radiation that is interacting with the increased CO2.  You can use a number of assumptions, but twice the change at the surface is likely the maximum you could expect.

Other than the "believers" that like to quote ancient texts (papers older than 5 years), there is a shift in the "consensus" to a lower sensitivity range but no one can put their finger on why.  The simplest explanation is that someone screwed up in their hunt for the absolute worse possible case.

Whatever the case, an increase to 700 ppmv will likely produce less than a degree of warming at the real surface but could produce about 1.5 C degrees of warming or a range of ~0.75 C to 1.50 C degrees.
Posted by Unknown at 9:50 PM