More on Ekman Transport and the Shifting Westerlies 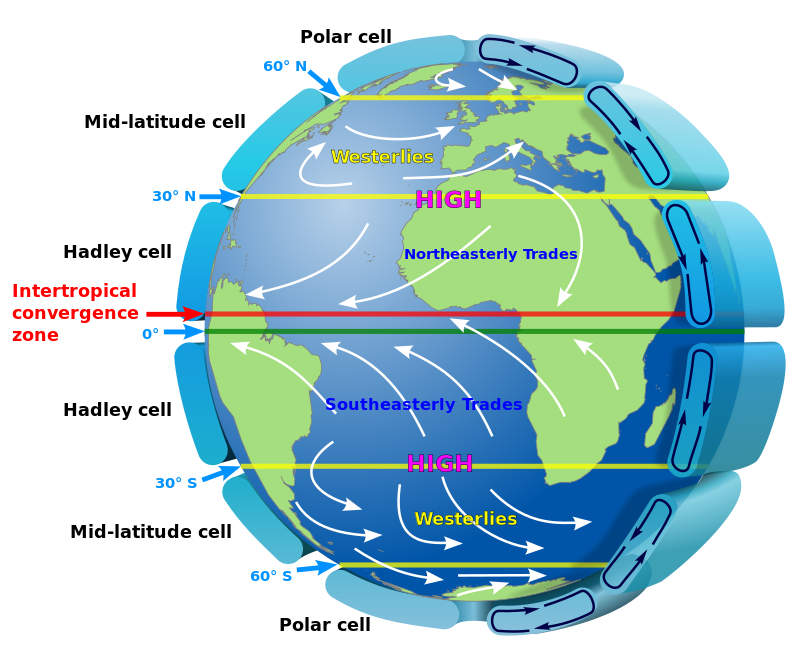 A recent paper, Deep Old Water explains why the Antarctic hasn't warmed,  is really a more specific and updated version of Toggwielder's Shifting Westerlies.  When the westerly winds shift the temperature of the water transported by Ekman currents changes and you have a larger than many would believe climate impact.  Sea Ice extent can also change the amount of transport when it covers or doesn't, colder polar waters than can be transported toward the equator by westerlies or toward the pole by easterlies at the arctic circles.  The Antarctic is given most of the press because it has a huge temperature convergence that can change by more than ten degrees in less than ten degrees latitude.  The Antarctic winds are also much more stable relative to the Arctic winds which can be changed dramatically by the less stable northern polar vortex.

As I have mentioned before, changes in ocean circulation due to the opening of the Drake Passage and closure of the Panama gap likely resulted in about 3 C degrees of "global" cooling with the NH warming while the SH cooled.  That is a pretty large change in "global" temperature caused by the creation of the Antarctic Circumpolar Current and other changes in the ThermoHaline Circulation (THC).  Pretty neat stuff that tends to be forgotten in the CO2 done it debate.

The "believers" demand an alternate theory where "your theory is incomplete" should suffice and for some reason the simplified slab model gang cannot seem to grasp that a planet 70% covered with liquid water can have some pretty interesting circulation features with seriously long time scales.  That is really odd considering some of their slab models have known currents running opposite of reality.  One seriously kick butt ocean model is needed if anyone wants to actually model climate and that appears to be a century or so in our future if ever.

In addition to the Drake Passage and Panama gap, relatively young volcanic island chains in the Pacific can impact ocean currents along with 150 meters or so of sea level variability on glacial time scales.

In any case, it is nice to see some interesting science on the ocean circulation over longer time scales for a change.
Posted by Unknown at 10:35 AM