The War for the Tropical Oceans

There is an interesting battle going on between ocean proxy groups.  Personally I have become a G. Ruber fan and am a bit skeptical of the coral fans, but both have their strengths and weaknesses.  Since both are based on biological organisms that have survival instincts, it is anyone's guess how well they would deal with extreme conditions so both likely have divergence issues.  In addition to the proxies having divergence issues, the instrumental data also has divergence issues early in the records.

Robust global ocean cooling trend for the pre-industrial Common Era, McGregor et al. 2015 includes Delia Oppo as a coauthor and I use Oppo et al. 2009 quite a bit of the time as a reference.  While this paper is "global" and not just tropical, the tropical reconstructions carry considerable weight as they should.  They tend to consider the volcanic impacts starting around 800 CE, though the major impact should be around 1200 CE.  They also consider some ocean dynamic mechanisms,   but on time scales greater than 200 years, the volcanic forcing would be enough to reasonably explain the cooling, i.e. the Little Ice Age.

Tropical sea-surface temperatures for the past four centuries reconstructed from coral archives,  Tierney et al. 2015,  also finds pre-industrial cooling, but up to circa 1830 and don't get into mechanisms.

The war really is over how much cooling and when did it end.  McGregor et al. are in the 1700 CE minimum while the corals show a minimum about 130 years later.  Since the lowest minimum was likely in 1700, the corals could be missing a bit of the range, and Tierney et al. mentions that secular trends isn't a coral strong point. 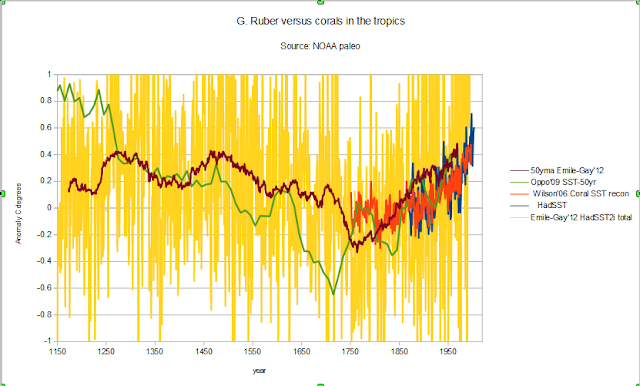 Rob Wilson has a previous tropical corals reconstruction (30S-30N) that started in 1750 that didn't indicate much pre-industrial cooling and Emile-Geay has a Nino 3.4 reconstruction of corals that indicated some of the pre-industrial cooling with a minimum around 1750.  Corals can have a 30 year recovery time frame from either a warm or cold event which is one reason I am not a big fan.  G. Ruber proxies can be a bit on the cold side because G. Ruber is mobile, unlike corals, but their cold nature wouldn't explain the peak around 1150 CE. Both Oppo 2009 and Emile-Geay 2012 are single location reconstructions, but the Indo-Pacific Warm Pool (Oppo 2009) has a strong correlation with global temperature and NINO 3.4 has a strong correlation with El Nino related variability.  If we are looking for a proxy for GMST, I would go with Oppo 2009.  This makes me question the practice of throwing multi-proxy reconstructions together when they different strengths and weaknesses.