The Antarctic is Getting Some Scientific Love

There is a new paper out on the Antarctic climate change.  The paper by Orsi, A. J, Cornuelle, D. B. and Severinghaus, J. P., Little Ice Age cold interval in West Antarctica: Evidence from borehole temperature at the West Antarctic Ice Sheet (WAIS) Divide, has and interesting chart. 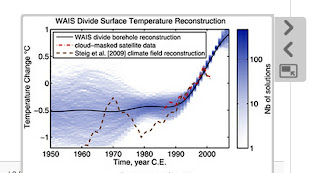 The ice core data is compared to the Steig et al, 2009 temperature fabrication and a cloud masked satellite data series.  The match with Steig et al is generally poor with the exception of the more modern period which was not an issue in Steig et al. and a better but not all that outstanding match with the cloud masked satellite data.  Finding a reliable and long Antarctic temperature series is not all that easy.  It is a rough place which is rough on people and equipment.  So since I like being helpful, I tried a little trickery on the Amundsen-Scot temperature record downloaded from GISStemp.


The trickery is pretty simple.  Amundsen-Scot is very cold year around.  So temperature anomaly may not be all that meaningful.  Energy anomaly might be more meaningful.  Since the source of the ice was water somewhere in the area at or near freezing, I converted the Amundsen-Scot temperatures to Watts, determined the anomaly in Watts, added that anomaly to the energy at o degrees C (273.15K degrees) and converted that to temperature anomaly.


Why?  Because it was raining and I was playing with my spreadsheet.  Actually, the oxygen isotope ratio in the core would relate to the temperature of the water forming the ice more than to the local temperature.  Since Orsi and gang used the 1986 approximate satellite record start, here is my little contribution with a 1986 start. 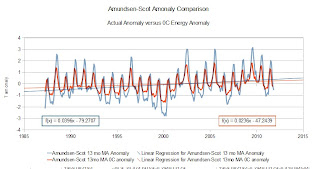 While the scale I use doesn't look that menacing, the slope of the regressions are in the ballpark of Orsi and gang.  Note that the orange curve slope is a good bit less than the blue curve slope.  A smaller change in temperature at 0 C can produce a larger impact on a area at -45C.  So there has been considerable warming at Amundsen-Scot since 1986.  There would be even a greater rate of warming starting in 1995 when the stratosphere temperature shift occurred and even more starting in 1999 following the super El Nino.


What about starting at the beginning of the Amundsen-Scot records? 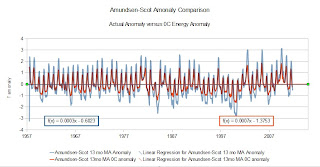 There is minor warming for the full record which would be a better match for their reconstruction.  Imagine that?


Now if Orsi and gang really want to wow the masses, they could compare sea ice variation with their reconstruction and find out where that ice came from.


Early I said that the oxygen isotope ration in the ice core would relate more to the energy of the water that formed the ice, so why is there a pretty good match with the Amundsen-Scot surface temperature?  That snow is delivers a good portion of the energy that reaches Amundsen-Scot, especially in the winter.


UPDATE:  I redid the Amudsen-Scot with a 60 month centered moving average and rescaled to overly the Orsi et al. chart. 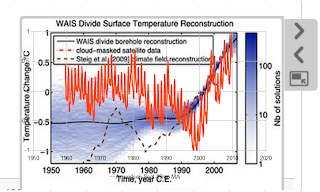 Note that the time scale is shifted back about four years.  That may be a product of my smoothing, but more likely a product of the nature of the Antarctic.
Posted by Unknown at 12:34 PM