Back Radiation - More of the Same Non-Sense 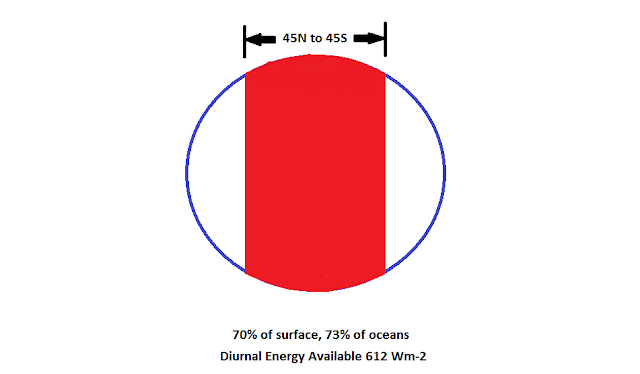 With the new Stevens and gang Earth Energy Budget comes the same non-nonsensical discussion of back radiation.  The 10 ball drawing above will be yet another attempt to stop that non-sense.

The 612 Wm-2 is a "peak" value for the diurnal average it would also be the Day time average since at night the Sun doesn't provide energy.  Since the Earth rotates on its axis, this "peak" is just like the "peak" voltage of a sinusoidal power supply.  The root mean squared (RMS) value of a 612Wm-2 sinusoidal power supply would be 612 divided by the square root of two - 612/1.414=432 Wm-2.

Resistances is plural because a battery can charge and discharge at different rates.  Internally, the battery's resistance to charging increases as it approaches its maximum capacity.  The circuit or load that the battery is connected to can vary with "demand".  If the demand is constant, then as the capacity of the battery reduces, the electromotive force or voltage reduces which would reduce the current or energy flow to the load or "demand".  Since the Earth's oceans have the highest heat/energy capacity, the charging resistance and load resistance would determine the condition of the Earth's Charge or average heat content.

Since the composition of the lower atmosphere includes much greater mass and more water vapor, the resistance to energy flow would naturally decrease with altitude.  In the denser lower atmosphere, energy is "conducted" by more than radiant means, so it is easy to confuse "back radiation" an indication of energy flow, with the actual energy capacity of the atmosphere the energy is flowing through.

Since Stevens and gang indicate that the "net back radiation" is 53 Wm-2 (by subtracting 345.6 Wm-2 DWLR from 398 Wm-2 OLR), the atmospheric voltage divider may have slightly different resistances.

There is nothing wrong with using the gross values of radiant energies, but without considering the source of the gross energies and the methods of energy transfer, it is easy to confuse cause and effect.  That is why most "Sane" people avoid gross radiant values in systems that are likely not primarily radiantly driven.  If the water in one end of my pool is 10 C degrees and the water in the other end is 20 C degrees, I would not attempt to determine the average energy of the pool by converting 10 C to 283.15K, convert that to 365Wm-2 then determine that 20C has an energy equivalent of 419Wm-2 then use the gross radiant energy values to determine anything about a virtually radiantless energy transfer process in a frigging swimming pool.

I hope this helped.