Mushy Ball is the new fictitious planet in solar orbit.  Since Mushy is new to the neighborhood, no one is sure what will happen with Mushy now that the light of day is shining on the planet.  Professor Joseph R. Genius believes that the planet will turn into a frozen rock.  Professor Uri F. Kidding thinks J.R. is smoking something and that Mushy will turn into an Earth like planet. 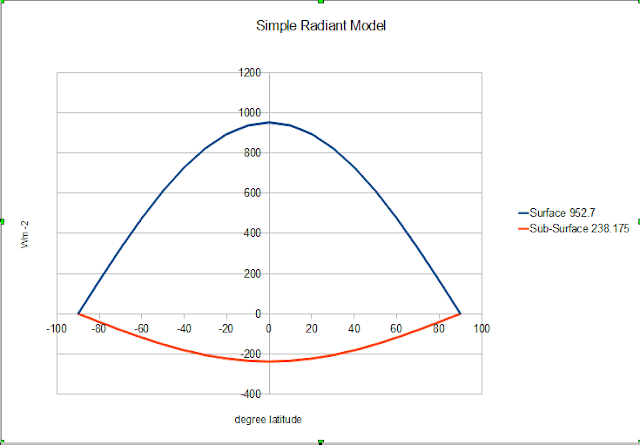 Uri whips out his simple model showing that at Mushy noon, the new planet has exactly the same solar forcing as Earth at the "surface" and that IF Mushy absorbs 25% of the energy below that surface it would have nearly the exact same energy absorption that the Earth has.  Junior responds that Mushy is still cold and with freeze creating a pristine white snow covered surface that reflects 99 percent of the solar energy and to boot would emit 99 percent of any energy that was absorbed. 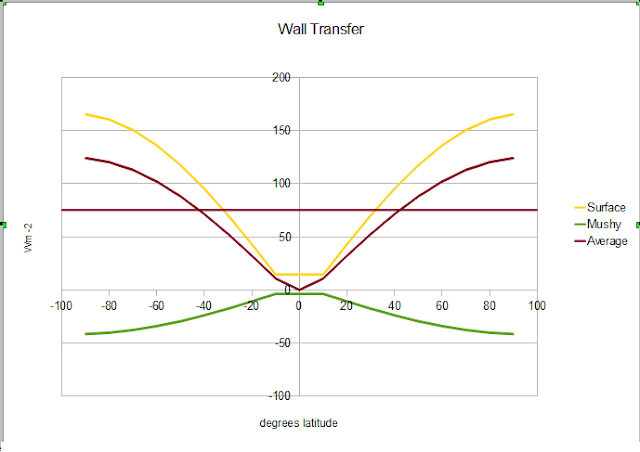 Uri shows the above chart and tries to explain time to Junior.  The chart is wall energy transfer.  The equator of Mushy receives nearly 960 Wm-2 of energy.  For Mushy to turn into a snowball, all of the energy would have to dissipate from the surface and sub-surface by the next dawn.  For that to happen, virtually no energy could be absorbed below the "surface" Junior sees, because the internal rate of energy transfer would not be the same as the "surface" rate of energy transfer.  Junior's theory has run into a wall.

The green curve is sub surface "Mushy" energy.  Whatever energy is absorbed at the equator, a portion of that energy will travel towards the poles.  The curve shows the potential difference between 10 degree "walls"  Since the "surface" of Mushy is less dense than the sub-surface, the rate of transfer through these walls would be slower below the "surface" than above the "surface".

What Uri is trying to explain to Junior is that there is no "surface" but a series of surfaces.  Each surface, because of different density of composition would have different internal and external rates of energy transfer.

Surface 1 would have wall transfer 1.  Each progressive surface in the chart above absorbs half the energy of the surface before.  The wings of the first wall are taller, so it would be easier to transfer energy to the surface than to the poles.  The deeper the absorption penetrates  the easier the energy trans fer to the pole is with respect to the surface.  Since surface 1 absorbs 25% of the incident radiation, surface 2 is 12.5%, surface 3 is 6.75% and surface 3 is 3.375% of the full radiant energy at the equatorial surface.  If the "surface" is frozen away from the equator, the transfer of energy becomes more difficult and the "surfaces" below the frozen surface retain more energy.  For Mushy to not gain energy, the equatorial surface would have to be impenetrable.   With the sub-surfaces retaining more energy, even if is only a fraction of a Watt per day, Mushy will approach Earth like stored energy conditions.