Climate is Cyclic.  The Earth Rotates and orbits around the Sun.  Just those two create 24 hour and 365.26 day cycles.  Since the Earth rotation is not perfectly smooth, it slowly wobbles around with a period of roughly 21,000 years, called precession.  There are more, but just consider the annual and 21,000 year cycles.

Marcott et al. averaged the Holocene, a period of roughly 11,000 years or half a precession cycle.

If the Northern and Southern Hemisphere are 180 degrees out of phase, that is the average Marcott should find.  Average is equal to the sum of the two precessional season sine waves. 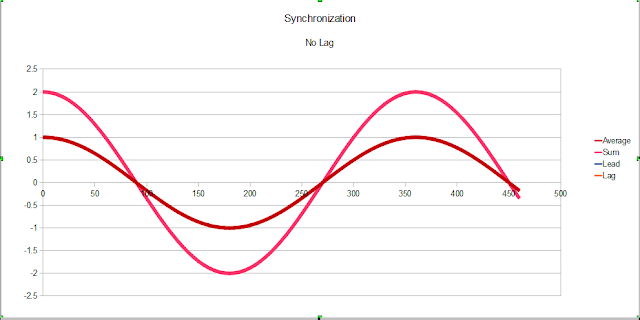 If the precessional season has no lag at all, this is what Marcott et al. would have found.  The Average is equal to the cycle with the sum of the two being twice the average value.

Marcott et al. were only looking for "average", their method would suppress any synchronization of hemisphere impacts.

So Marcott et al. is essentially saying that it is unprecedented for the last precessional day, 58.33 years, to be warmer that the average of a precessional winter and spring.

We actually pay these guys to do this stuff.
Posted by Unknown at 7:01 AM