With the Marcott et al. 2013 and other temperature reconstructions rehashing the same old same old issues of uncertainty, I thought I would create an example for the less statistically inclined among us, including myself. 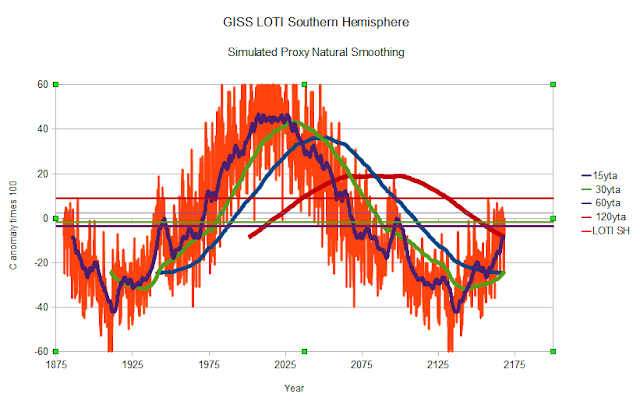 This could be a climate scientist's worst nightmare, 100% natural variability.  What I have done is taken GISS land and ocean temperature for the southern hemisphere and just reversed the trend into the future.  Then I used doubling period trailing averaging of the nightmare so we can see how the natural smoothing of paleo temperature proxies could impact our perception of climate change.  I used trailing averages because ocean core samples are generally dated at the top and the average of the thickness of the core sample would extend back in time from that point.  So a sample dated 1950 with a 100 year time range would actually be the average for the period centered on 1800 AD.  Since there is no standard proxy sampling period, you can easily have a mish-mash of smoothing periods when assembling a temperature reconstruction.

The example I am using is a instrumental series that can have a daily resolution if you like.  You could add a few billion more readings and reduce the uncertainty of the instrumental to about 0.12C realistically, but you still have the potential of 0.24 C uncertainty if you select any one point.

I used the GISS SH LOTI because it is likely the worst of the instrumental temperature reconstructions since data for the far south was not available until roughly 1956, about half of the full instrumental series and there is much more SST data impact that has very sparse coverage and its own set of uncertainties, not the least being there is no Tmax and Tmin for the SST to be averaged like land surface air temperature is averaged.  The southern oceans prior to 1960 are basically a wild ass guess polished up a bit. 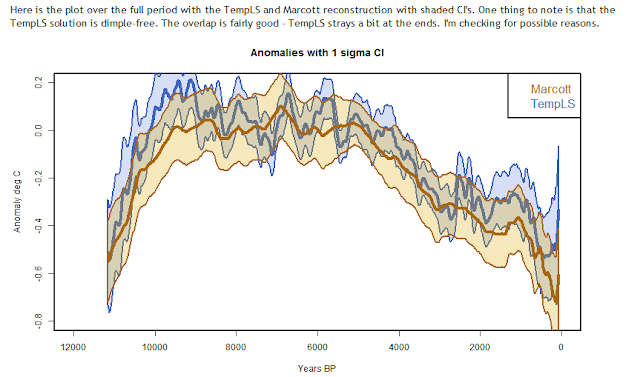 The uncertainty that Nick Stokes has for his novel new proxy combining method is close to the 0.12 with the +/- producing the same 0.24 C uncertainty for any one point, like at the end of his reconstruction.  I am pretty impressed with Nick's method and hope he gets it published.

There is one humorous part of this reconstruction.  Should I combine it with the 120 yta smooth of the GISS LOTI SH data, today's instrumental is unprecedentedly lost in the noise :)
Posted by Unknown at 8:57 AM