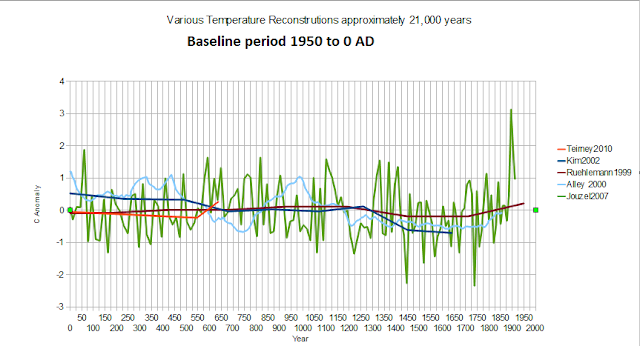 While paleoclimate reconstructions are useful, I have never found the accuracy reliable enough to draw many conclusions.  I do tend to consider the relative variations between regions and for the paleo-oceans, depth informative.  There is no problem with paleo, other than over estimating the accuracy, as far I am concerned.

With the Marcott dust up, rational limits to paleo is again a hot topic.  I am a firm believer that the best way to "splice" paleo reconstructions if you must, is from the most recent to the older.  We live in the present, the cores were collected in the present and the methods use to calibrate the cores where developed in the present, since paleo is our window to the past, I prefer to work back in time.

I have an example of five paleo reconstructions I downloaded from the NOAA Paleo archives.  The reconstructions are pretty clearly documented though it can be a little difficult to find the "present" in the before present, from time to time.  When in doubt, 1950 appears to be the standard for "present".  In the example, two of the reconstructions have a lot of data between 0AD and "present", one has a reasonable amount for the period and two are limited to just a few points in the past 2000 years.

Since the Paleo climatologists calibrated the dates and temperatures, I assume they are in the ballpark and based my average on the more modern era, 0 to 2000 AD.  The alignment is what it is.  Since each reconstruction has a range of error associated with each data point, there is no sense trying to make more of this alignment than the error of the individual reconstructions will allow. 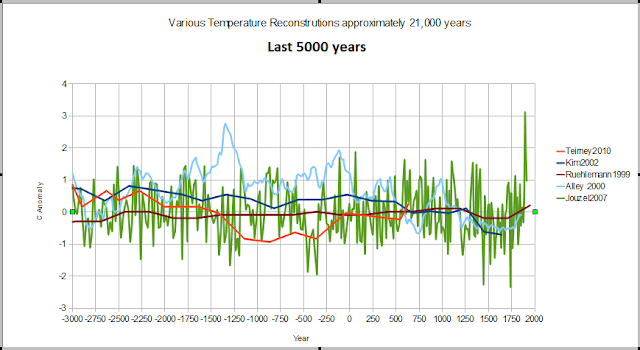 For the more recent 5000 years, this is how the alignment looks.  The Alley 2000 and Joulez 2007 reconstructions are for the Greenland and Antarctica.  They represent a fairly small but highly variable portion of the Globe.  The Kim 2000 and Ruehlemann 1999 recostructions are in the tropical Atlantic and the Tierney 2010, which I have misspelled, is from Lake Tanganyika.  These three reconstruction would represent more of the energy of the Earth and should likely be weighed more heavily if I were building some "global" temperature reconstruction. 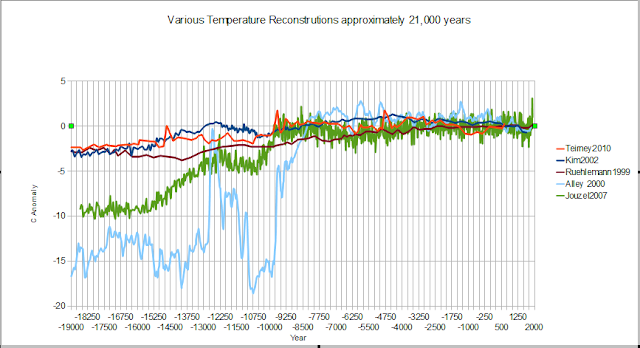 This chart shows my selected full period for combining the reconstructions.  From this, the Antarctic region started coming out of the Ice Age first followed by the Arctic region using Greenland as a reference.  The other reconstructions stay is about a 4 C range.  Near present the data series all converge because of my choice of baseline.  At the start of the data series, the three tropical come close to converging again at -2.5 C +/- a few tenths.  If the tropics represent most of the energy of the planet, their variation between glacial and interglacial is only about +/- 2 C degrees with +/- 1.25 C degrees closer to the average variation in tropical conditions, not including the uncertainty of the individual reconstructions. The Antarctic has roughly a 10 C range and the Arctic a 15 to 20 C range.

The Antarctic reconstructions also have the popular "global" CO2 change which appears to be reasonably close to "global" with a range of error of possibly 100 ppm or so. 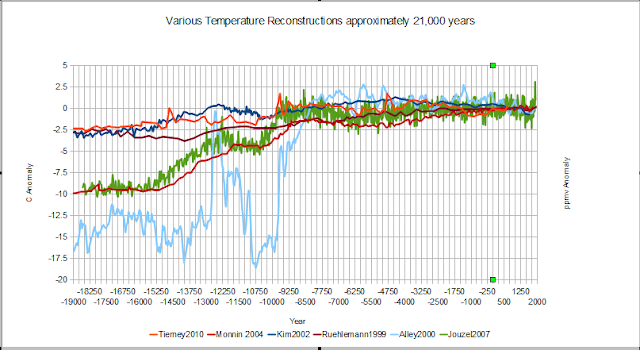 The Monnin 2004 Antarctic composite CO2 reconstruction is include in this chart.  I used the same baseline to calculate a CO2 anomaly, then scaled the CO2 anomaly by dividing by 9.5 to match the start of the combined reconstructions.  Based on this "fit", CO2 appears to lag the Antarctic reconstructed temperature as has been noted by a number of climate junkies and real scientists.  There is no "robust" correlation of CO2 with the other reconstructions apparent.

There are thousands of regional temperature reconstructions. It might be interesting to see where more of the regions converge using the 0 to present baseline.

Nick Stokes has kindly put together all of the reconstructions that Marcott used on his Moyhu blog.  The black mini-hockey stick ending at about 1350 BP above and about 1 C below mean is the Author, Tierney's
dating. 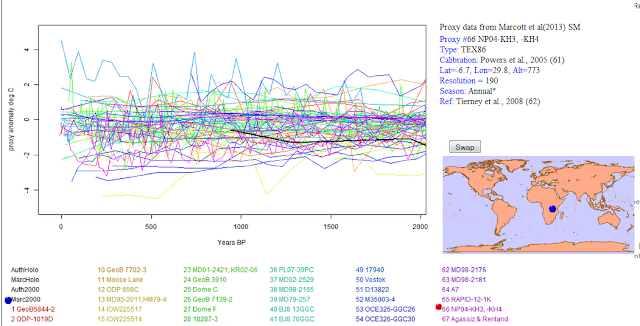