Does "Surface" Temperature Confuse the Hell Out of People? 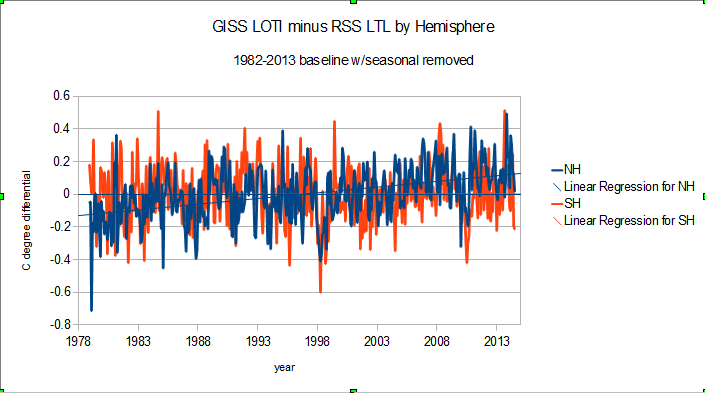 Pretty much.  This chart compares the difference between the GISS LOTI product and the RSS Lower Troposphere product.  The GISS product interpolates large regions of the poles that have very limited coverage and the RSS product doesn't include a small portion of the poles due to orbital/imaging limits.  The most obvious issue is that the northern hemisphere comparison is diverging significantly while the southern hemisphere agrees very well.  Most of the difference is likely due to polar interpolation of very low temperatures that have much less related energy than the mid and lower latitude temperatures.  This goes back to the zeroth law issue where the greater the temperature range and variation of the data averaged the less likely that average temperature will faithfully represent average energy.

This has been mentioned so often that it is one of those issues that is refused to be considered because it has been "settled".  Settled means it has to become so glaringly obvious that the geniuses cannot possibly defend their simplistic dismissals.  So if you bring it up too soon, you can expect a psychological analysis of your online history and likely a few more serious insults if you are in a position of scientific authority.