What if there were no thermometers only Wattmeters on Earth?  Instead of people inventing temperature measuring devices, they jumped right to energy.  Then we would have bank signs like 405 W 12:01 pm.  When you see 315 W 6:00 pm, you know to protect your plants and pets, it's gonna get low energy tonight.  We would keep on keeping on with our linear little lives and physics would be a cakewalk in high school.  Just about everything would appear linear relative to our exponentially skewed perception.

That is a graph from the KNMI Climate Explorer website.  A while back I went to a lot of trouble down loading the Reynolds Optimally Interpolate v2 data by 5 degree bands of ocean.  Then I converted each band into "effective" energy using the Stefan-Boltzmann relationship to plot a "global" SST "energy" profile.  Today I decided to do something a little different and determine an "average" global energy using all the actual ocean areas per 5 degree band and I came up with about 410 Wm-2.  That's great for me, but let's say I have an out of planet visitor that would really like to see the temperature instead of the energy.  He is from one of the slower planet on the far side of the Milky Way.  So I plot him out a chart of temperature using my energy data. 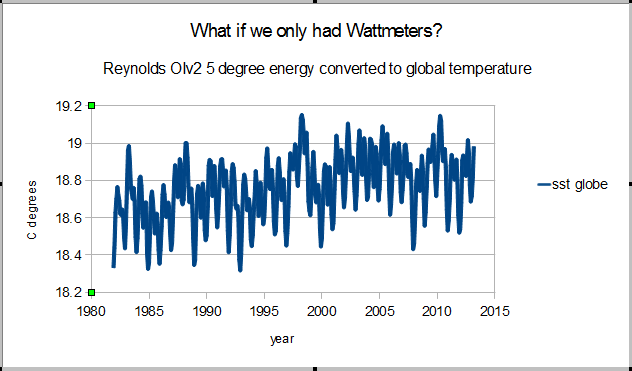 It loot about the same but it isn't quite.  My average temperature is about 18.8 C degrees and his is about 18.3 C.  He get's a bit confused, but I tell him temperature really isn't a big thing around here because it is really all about the energy.  "But there are much larger changes in the temperature!" he says.  "So?" 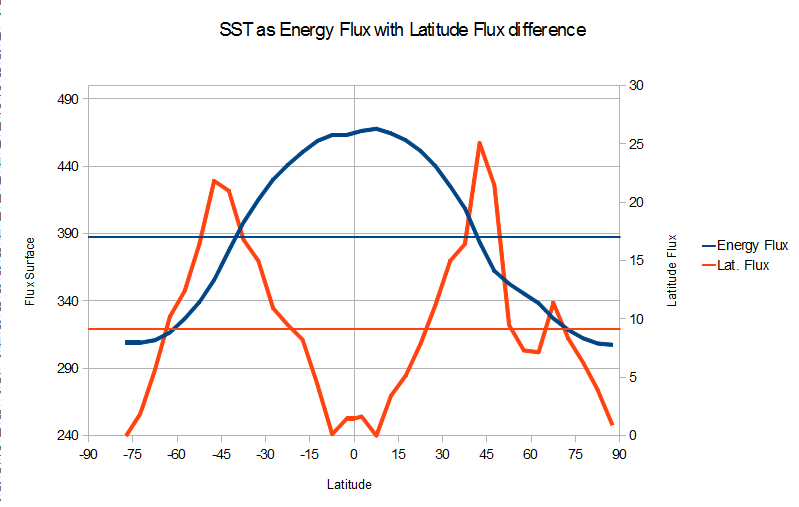 If I didn't include the surface area adjustment, the average energy would have be around 390 Wm-2 which is close to the "average" energy of the surface.  Land and sea ice don't store much energy so they vary all over the place.  The area between latitudes 60S and 60N is close to 87% of the total surface and has most of the energy.  That would be the dog, the polar regions the tail.

If I crop the tails a bit, his temperature and my energy converted to temperature look about the same.  Mine still is a bit less variable, but the averages are in the same ballpark.  The tails (poles) just add to the confusion in the conversion process.

That plot is the "global" lower troposphere temperature in Kelvin.  the average temperature is about 271 or about -2C degrees or about 309 W m-2 "effective" energy.  Peak to valley it varies more than three degrees.  Start to finish, not so much.  The interesting thing about the RSS MSU method is they start with and energy indication, brightness I believe, then convert that energy indication into temperature.  It they produced an "effective" energy product, then you would have a direct comparison to changes in "forcing" without all the conversions.

Since the average "effective" energy of the oceans is about 410 Wm-2 but the oceans only cover about 70% of the "surface", at the lower troposphere which is suppose to cover 100% of the "surface" the ocean energy would be reduced to 0.71*410=291 Wm-2 which is little less than the "effective" energy of the RSS data, that really doesn't quite cover the globe, nor does the Reynolds data, plus you always have that silly sea ice issue of course.

On a Wattmeter world though, I doubt we would have as much of a "global" warming problem.
.