What is the "Right" Solar Reconstruction? 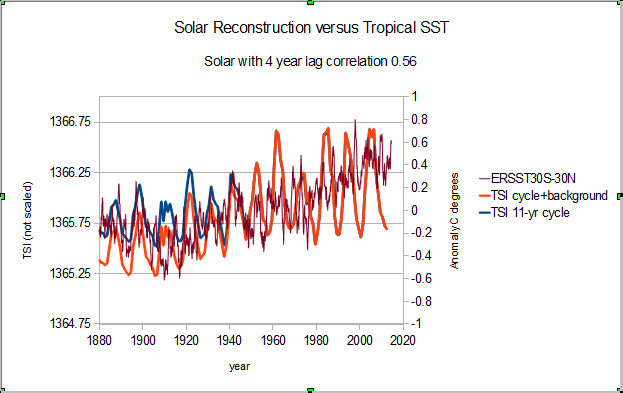 I have played around with Solar a few times and found some interesting things but there is nothing very persuasive considering no one is in any kind of agreement how solar really should be handled.  My biggest issue is that solar has its strongest longer term impact in the near tropicial oceans, rough 40S to 40N and short term impact in the NH land areas from around 25N to 60N.  There is also a "year" issue.  Since a Solar year is not the same as an Earth year and months are a pretty Earth only related time frame, you get a better correlation between solar and the tropical ENSO region using a 27 month lag which would likely be better with some fraction of a month.  Using daily data is a huge issue for my laptop, but would be the best way to go with things.  Anytime you try to determine correlations between averaged data sets there will always be some issue that could be extremely critical if you are talking with the serious statistical guys.

Solar "TSI" is a bit of an issue also.  You really should use spectral intensities which once you add that to daily or some number of hour records gets to be a huge database for the laptop tinkerer.  On top of that, solar reconstructions require different scaling factors due to issue with different data types and lower atmosphere solar has a lot of background "noise" or maybe signal that could be related to atmospheric optical depth.  It is one big ass can of worms.

Still, it is hard to avoid tinkering with solar correlations despite the issues.  I did the above chart just for grins.  The maximum correlation I could find between solar "TSI" anomaly and the "tropical" ocean SST (30S-30N is a bit more than just tropical) is 56% which is nothing to write home about.  It is probably just enough to inspire more looking, but not enough to convince anyone of anything.

The 4 year lag used to tweak the correlation is about half of the settling time Steve Schwartz estimated for the bulk ocean layer.  To me that would suggest that there is a fast response plus a lagged response of about equal intensity.  I have combined different TSI lags in the past and can get just about any correlation I like up to about 87% or so depending on which surface temperature data set and area I pick.  That gives me way too many degrees of freedom to trust.  All is not lost though.

Since there are quite a few published papers noting links between ENSO and reconstructed TSI, the average tinkering Joe cannot be classified a complete whack job because he has "professional" company.  The trick is coming up with a compelling rationalization .. er explanation, of why you used what in your "analysis".

I am sticking to my multiple lag theory because ocean heat transport would support a number of lags and sub surface insolation which highlights the tropicalesque ocean influence on long term climate.  So instead of using Land and Ocean temperature data, ocean only should be a focus with a possible Ocean plus 8 year averaged Land hybrid temperature data set.  That would basically incorporate the ocean settling lag making the "global" temperature series a bit less noisy without having to cherry pick an averaging period. 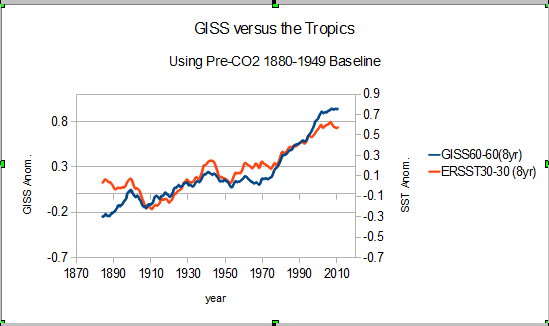 This is what MAY be my choice of data sets for comparison to solar.  Note that I used a Pre-CO2 baseline, since ACO2 supposedly didn't kick in until ~1950.  I used two different scales just for this comparison to show that my cherry picked, er selected regions tend to agree.  I used the GISS 1250 km interpolated data though the 250km data would normally be my choice.  Since the highest latitudes aren't included there isn't much difference.  This chart is just to show that using just the 30S-30N tropical ocean, I am not losing touch with global temperatures as much as some might think.  The tropical ocean would be the major source of global energy after all.

There is a good chance this is a far as this will ever go unless I bite the bullet and download daily data.  In case you are wondering, the excluded high latitudes contribute about 18.5Wm-2 (north) and 13 Wm-2 (south) to the "global" effective energy.  The rough average effective energy of the 60S-60N region is ~410 Wm-2 so the exclusion would add about 7.5% to the energy uncertainty versus about 12.5% to the temperature anomaly uncertainty.  One of my pet peeves about manufacturing temperature data in the polar regions is that it artificially doubles the impact in some cases
Posted by Unknown at 10:13 AM