Variation in the Moisture Envelope and Expanding the Model

The moisture envelope, or the volume enclosed in the Moisture Boundary Layer varies seasonally. 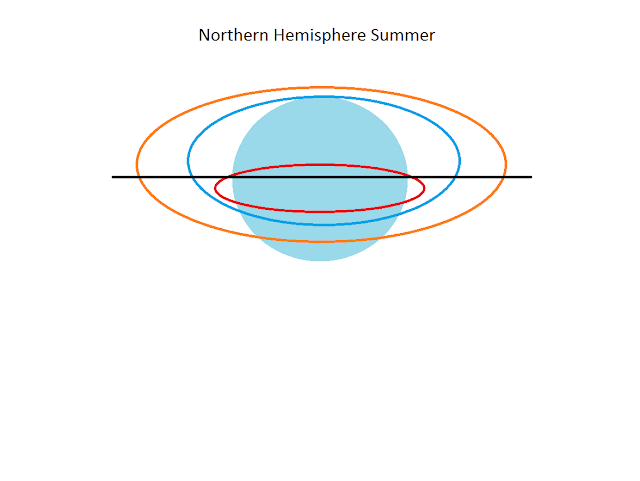 In Northern hemisphere summer, the envelope shifts toward the northern pole.  Since the actual pole experiences temperatures above 0C degrees, moisture is a factor in the summer months, the envelope includes the entire polar region.   The Radiant Boundary envelope also includes the entire pole.  The tropical heat band of the oceans move northward.  However, since there is a greater percentage of land area, the higher energy portion of the SST averages closer to the Equator. 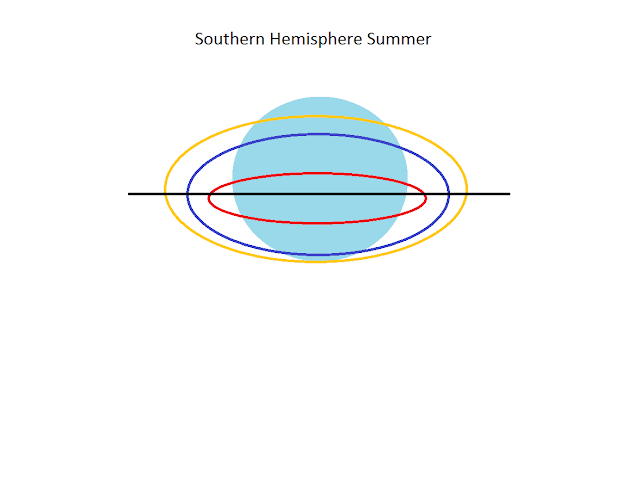 In Southern Hemisphere Summer, there is a more uniform poleward shift of the higher energy portion of the sea surface temperature, the overall volume of the moisture envelope increases as does the radiant envelope. Despite the higher solar insolation during SH summer, the radiant boundary of 240.2K does not fully include the southern polar region and the moisture boundary does not include the southern most polar region.  These differences provide a chance to tweak the basic model.

The chart above is the sea surface temperature and temperature of various atmospheric layers as determined by the AQUA satellite.  It shows that the oceans are warmer during the Southern Hemisphere Summer and the atmosphere is warmer during Northern Hemisphere Summer.  Since the model is based on SST and not surface air temperature, using the satellite data with the model should help reduce some of the uncertainty associated with the surface temperature record.  There will still be uncertainty, but designing the model for the satellite data should be an improvement.

Using the modeled 118.1Wm-2 MBL energy flux with the AQUA SST and 188.8Wm-2 Total energy Flux with AQUA channel 6, the blue  and orange plot show the estimate energy imbalance.  The Yellow plot is AQUA ch-2 minus the 188.8Wm-2 reference and enlarged with the right Y axis indicating the mean imbalance for the period as approximately 0.24Wm-2 and the regression showing the imbalance approaching zero.  Note: this is only the estimated ocean imbalance enclosed in the Moisture Boundary Layer envelope.
Posted by Unknown at 3:43 PM