Why is the Sensitivity 0.8 Degrees 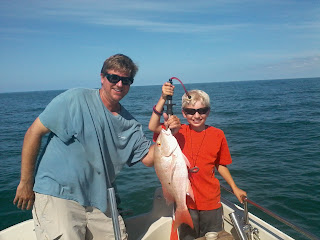 I started this blog because I was posting climate stuff on my energy blog.  The reason for the climate stuff was that alternate energy was becoming less of a hot topic.  A shame, because there is some very interesting alternate energy options out there.  When I started looking at the climate science, I noticed some things that just did not fit.  Global warming is just one big ass thermodynamics problem.  Thermodynamics involves a lot more than just infrared radiation.

The first thing I noticed is that the term down welling long wave radiation is used.  DWLR is nothing more than the temperature of the sky which can be used as an indication of the resistance to outgoing infrared radiation.  Pretty much anyone that has ever insulated something knows that radiant heat loss is an issue, but conductive heat loss also has to be considered.  If you insulate a wall with a dry, still air space it will lose less heat.  Most don't know that if you add a radiant barrier, it will lose 1/3 less heat.  A complete radiant barrier increases the resistance to energy flow by 50% meaning it is responsible for 1/3 of the energy savings.  2/3rds of the heat loss would still be due to conductive initiated energy flow.  Radiant barriers do not stop conduction so there is not perfect insulation or combination of insulation types.  There will always be heat loss, you can only reduce the amount.

Since heat loss is a given, you can figure out about how efficient your insulation may be, by seeing how much adding some more would change things.  To do that, you need to know where you are first.  The Earth has an average of 240Wm-2 of heat loss.  The average surface temperature is around 15 degree centigrade, so the interior heat is around 390Wm-2 on average.  The difference between what is retain and what is lost is 240Wm-2 minus150Wm-2 equaling 90Wm-2.  Since space is at near zero degrees absolute, that difference seemed a little higher than it should be.  About the most heat that out atmosphere should be able to retain should be half of the 150Wm-2 or 75Wm-2.

The reason it is higher is because the upper atmosphere also can gain and lose heat.  Since we have more heat retained, there must be a lower surface energy sink.  The coldest region inside the atmosphere is the tropopause.  It has a temperature that varies, but since the Earth is retaining more energy than it should, the tropopause should have a temperature that radiates 75Wm-2 which is about -82.5 degrees C.

While there are dozens of ways to estimate what flows should balance what temperatures in equilibrium, the Earth is not a simple box, it is a complex dynamic system.   Still there are some ways to simplify.

With the thought experiment there are 10 objects inside the insulation.  Seven are radiating 425Wm-2.  They represent the oceans with an average temperature of 294 K degrees.  Three are radiating at 308Wm-2 representing the land areas at 271.5 K degrees.  These are close to the average temperatures currently.  Note that 271.5K is just a little below freezing, roughly at the freezing point of salt water.  The latent heat of fusion of the masses of sea ice buffer the lower temperature.  While the system is dynamical complex, the freezing point of water, adjusted for the salt content, stabilizes the lower temperature range.  Since there is a large seasonal change in solar radiation, the sea ice rebuilds each winter.

The difference in the energy of the water and land mass on average produces an average flux from warmer to colder.  Since these two surface are enclosed in a common insulating blanket, the energy flow out from the combined masses is equal to the flow from the warmer oceans to the cooler land, which is 117Wm-2.  Since the total energy of the interior is 390Wm-2 with 117Wm-2 instead of 240Wm-2 at the top of the atmosphere, the difference would the radiant energy of the sink for the heat from the interior.  240-117=123Wm-2 This energy level is equivalent to the average tropopause temperature of -57.2 C which has an energy of 123Wm-2.

The sensitivity to an additional restriction to energy loss of 3.7Wm-2, the approximate forcing associated with a doubling of CO2 would vary base on the local energy.  By taking the ratio of the forcing 3.7Wm-2 and the surface energy flux at any reasonable temperature, this chart provides estimates of the sensitivity. 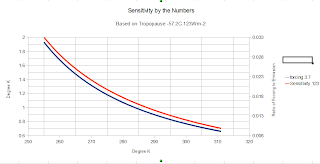 Proving why will require more work, but a simple model can produce interesting results.

Forgive any typos, but fishing comes before proofing.

BACK FROM CATCHING:  So if you have read this far you see some numbers but nothing that blows any wind up your skirt.  It really should.  The 271.5K average temperature of the land mass portion happens to be the freezing point of salt water within a small margin of error.  As salt water freezes, it has to release more heat, the latent heat of fusion, providing a feedback to the atmosphere.  With the enormous volume of water on Earth, this provides a long term feedback, on the order of  thousands of years.  When the Salt water freezes it forms fresh ice.  The melting point of fresh ice is 273.15 K degrees or about 1.65 C warmer which would limit the radiant heat gain set point by 7.56Wm-2.  So during an inter glacial period, there would be less fresh ice, the controlling temperature would be closer to 271.5K and during a glacial period, the controlling temperature would be closer to 273.15K.  That greatly limits the variation in "Average" Earth temperature.  Since the overall feedback is negative, as in sensitivity increases with decreasing temperature, this tends to erase the "faint sun" paradox and plays hell with the Green House Gas theory.

It also would pose some problems with ice core proxy reconstructions.  In the Antarctic where temperatures never exceed 273.15K degrees, the results would be totally different than in the Arctic where some eras the ice would never thaw and other eras where the surface layer of the ice could thaw.  Depending on the amount of thaw, the gases trapped in the ancient ice would not represent the conditions when the ice was deposited, but the conditions where the surface ice layer thawed.

Now you can have a long laugh at this outlandish claim, but I am afraid there are a few errors in Climate Science that are significant.