SteveF and the PDO versus North Atlantic

SteveF is a fellow resident of the not as tropical as they once where Florida Keys.  SteveF is a smart guy with a lot more statistical savvy than I have, but that doesn't mean I agree with everything he comes up with.  Recently he had a guest post on Lucia Blackboard where he considered using accumulation of PDO influence on climate.  I personally think that the PDO or Pacific Decadal Oscillation is important, but since it is just a lag response to the ENSO or El Nino Southern Oscillation, that there are better ways to skin this particular fish. 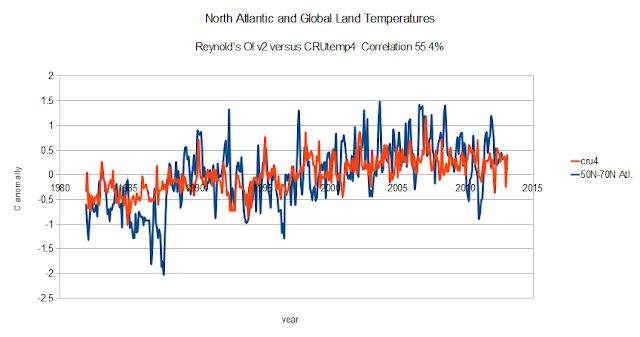 I think we need a better index.  Looking at the Drake Passage and Bering Strait Choke points for ocean heat distribution I thought that he should use something like a PDO modified for absolute sea surface temperature or energy versus a NOA (North Atlantic Oscillation) also modified for absolute SST.

Above is a comparison of the North Atlantic SST with CRUtemp 4 land only temperature series.  The correlation between the two according to my spreadsheet is 55.4 percent with no lag consideration at all.  The comparison is just anomaly using the 1981.90 to 2013.083 monthly baseline which is all the Reynold's OI v2 data set I used had available.  55.4% correlation is not super great, but pretty darn close.  If it was better, I would be more suspicious of something, mainly me and my spreadsheet, being amiss.

Since the North Atlantic region is truly accumulative, it is provided additional energy by the THC mainly from the southern ACC region, I would think that the North Atlantic would make a better choice for a Global Temperature index than the PDO which is noisier and involves more inconsistent lags.

Comparing the North Atlantic to the MEI, I found there is an apparent lag of roughly 8 years with the Atlantic as a whole.  It may be fun to compare the MEI, PDO and this North Atlantic region.

UPDATE:  With what appears to be a fair correlation between North Atlantic SST and Global Land temperatures I thought I would add this chart: 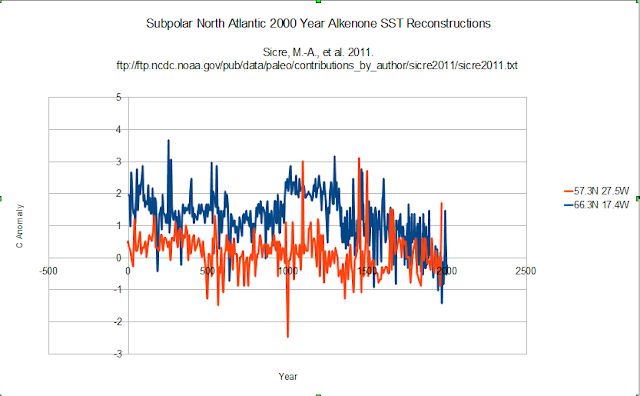 There is a little issue brewing about SST proxy reconstructions.  The depth of the core sample may cause the reconstruction to be less SST related and more actual depth related.  The core used in the blue, is MD99-2275:  66°33'N, 17°42'W, 470 m water depth while the orange is RAPiD 21-3K: 57°27.09'N, 27°54.53'W, 2630 m water depth.  I used anomaly instead of actual temperature because of the controversy, but with the variability of the shallower reconstruction being more than the deeper, is what one would expect both due to location and depth. 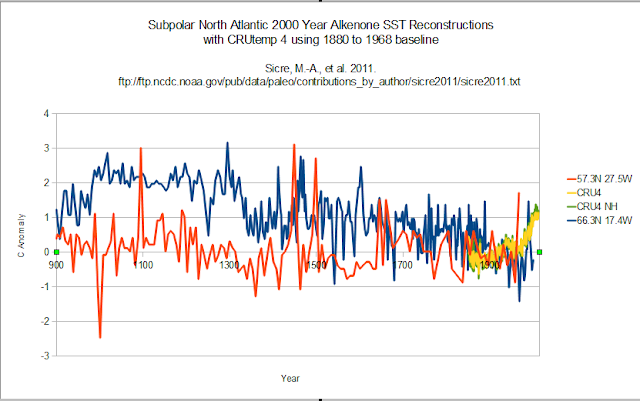 Just for grins, this includes the CRU4 Global and NH temperature series using the same 1880 to 1968 baseline used for the reconstructions.  It is apples and oranges, but since the satellite SST correlates to 55.4% with CRU4, it might make for interesting conversation.
Posted by Unknown at 7:30 AM