More on the 4C and Other Boundary Layers (From Other Blog) 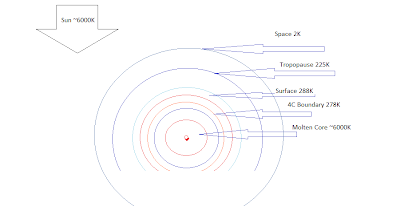 Again with the high quality graphics, the Temperatures of Earth, (yes, I know there is a degree or so off here or there.)

Most understand the simple heat transfer barriers, insulation, gas to liquid contact, optics and radiant energy. RHC just defines all heat transfer in terms of time scales (changes in rates of change may be better). It is a simplification, probably not an ultimate solution, but a step in that direction.

I will be working on this from time to time to define simple RHC boundaries. One of the more interesting is the deep ocean 4C barrier. This is density barrier, above 4C sea water density varies with energy flow. Below the 4C barrier, temperature is relatively constant as heat flow is slow, tens of millinia and mirco Watts per meter squared. The effect is the appearance of near perfect conduction of heat, thermal equilibrium on a much longer time scale, that is a much tigher, denser, probability cloud, i,e, if it is easier to locate a packet of energy, its rate of change is less.

What is The 4C Thermal Boundary?


Selecting a frame of reference is more than just a choice of a point in space, it is a choice of space and time. The 4C boundary in the deep ocean is the point of maximum density of our saline ocean. From this boundary upward is the ocean atmopshere mixing layer. Heat is transfer is much greater speed than below the 4C layer. Below the 4C layer is the ocean crust mixing layer. Its heat transfer time scale is on the order of tens of millinia.


This layer is from the 4C density boundary to the surface. There are several layers in this layer. The 100m layer, defined by shorter short wave radiant energy, green to ultraviolet, and the 10 meter layer defined by the longer short wave energy, yellow moving to near infrared, and the skin layers, millimeters to micro meters.


This is the most interesting boundary to me. Radiant heat from the surface of the oceans is limited by the coefficient of heat transfer from water to air. Changes in wind change the rate of flow. Changes in density change the flow. Changes in the composition of the gases change the flow. Once radiant energy is transferred, the photons enter a supercharge version of nature's pinball machine from Hell. Greenhouse gases can readily absorb photions but the much higher rate of collisional heat transfer to emission by relaxation is phenominal. Conductive heat transfer is more coherent in the direction of temperature drop while emissions are totally random. The absorption the collision de-excitation can enhance conductivity like crazy. The wavelength of the photon from one form of de-excitation can change in nanoseconds. Each of these relaxations that change wavelength can be less efficient than the last or more efficient than the next. This is thermal chaos! Going from near zero to light speed and back billions of times in fractions of seconds.

This is the main reason for my considering relativistic heat conduction and the possibility of variable light speed. While the speed of light may not vary, it would definitly appear to vary. It is like the doppler effect on steroids. Yeah, I think it is kind of exciting :)

This is one I was hoping could be lumped in with the troposphere. Unfortunately, the Latent Boundary layer is the point where latent energy from the surface is shifted upward to the point of average initiation of condensation. The relationship of theis layer to the average energy absorbed by CO2 is critical in gaining some understanding of the feedbacks, plural, of clouds and water as both liquid and solid. The atmospheric heat pipe I had discussed in a previous post. The balance of incoming solar, outgoing long wave and downwelling long is a complex relationship that determing if clouds are positive or negative feedbacks. This may be one of the more fun layers to attempt to describe.


In the Tropopause, you have up welling infrared with downwelling infrared with incoming solar at wide angles and scattered/reflected solar from below. A lot of different fluxes from all directions. The spectral window is very clear for some wavelengths and opaque for others. This is the one spot in the atmosphere that a sandard radiative model could get totally lost. More ice, water vapor or water would play hell in getting a good number. All it takes is a few molecules combined to change the radiant spectrum of the small amounts of water. Measurement of the changes would be complicated becaue of the available angles of emission and absorption not inline with the instrumentation. Getting it close is quite a feat. This is were RHC can really come in handy. The complicate relationships of heat flux can be simplified to temperature, pressure, potential temperature, which is a function of temperature and pressure, to get an estimate of the "effective" emissivity*. That may sound complicated, but the change in temperature with altitude is a direct indication of the net flux. Change in the rate of change of temperature is an indication of the magnitude and sign of the net flux. So the temperature relationship between the mid-troposphere temperature and the lower stratosphere can give you and indication of the flux relationships in the tropopause.

Now that the weird energy changes and actual change in the speed of light are ruled out, the relative motion of the of the photons is the impedance to radiant flux, which changes with density. Near the tropopause the side windows are more open, which expalins the dramatic changes possible in the tropopause. So it will be much easier to explain why the change in rate of change has such an impact. Resistance to flow through the stratosphere changes slowly with respect to the side windows, allowing radiant flux relief, if you will, for larger changes in flux from the surface.

What does this mean for the mid-tropo/strat Watt-meter? That larger areas of the stratopshere will be needed to get the full signal of the change in flux from the surface.

The confusing part is the "Effective" emissivity. In a straight line, electromagnetic radiation would follow all the classic rules. The mixture of wavelengths, energies and angles appears to be simplified as a single "effective" unit, with this special case of RHC. How accurately, I am still working on that. It looks pretty close and would be closer with two accurate estimates at two different denisities. The more points you get right, the more you can get right.

In any case, the change in the rate of change is very important.

Yes! Ladies and Gents you have read correctly! At approximately 100K, the magnetic portion of the Electromagnetic spectrum regulates the amount of warming possible by the atmospheric effect. While still preliminary, this also appears in the conditions of Mars and Venus. We have a new boundary!

As at the tropopause, but much simpler. With less banging around, the photons are more coherent. There is still some, "resistance" to flow so there will be a change in the rate of change of interaction entering relatively constant emissivity of space. Space still has a "resistance" so there is still entropy. So there is roughly an order of magnitude change in the rate of collisions between the stratosphere and space.