In 2009, Eric Steig and company published a paper that made the cover of Nature Magazine entitled, Antarctic Warming. The conclusion of the paper was than the antarctic has been warming at a rate of 0.1 degrees per decade from 1957 to 2006, five decades, 0.5 degrees of warming. The paper received a warm reception from the press, plus plenty of pats on the backs from the crew at realclimate.org.

Not long after the paper was publish, Hu McCulloch, PhD, noticed an error in the confidence interval of the paper published in Nature. That prompted me to write a short article on the quality of climate science and the scientific peer review process, Global Warming and Math Errors.

Not long after I wrote that article, a group of online climate skeptics reviewed the Nature paper finding more errors and ended up publishing their own peer reviewed paper on the Nature paper. If you search for the O'Donnel et. al paper this is the first link you would find, O'Donnell et al 2010 Refutes Steig et al 2009.

The O'Donnell et al paper does not attempt to determine the actual degree of warming or lack of warming in the Antarctic, it merely compares various methods and finds the methodology used in Steig et al 2009 is not very accurate. One of the co-authors of Steig et al 2009 is Micheal Mann, PhD, developer of the iconic Hockey Stick used to provide a visual aid for the proponents of Global Warming. Dr. Mann's statistical prowess has been questioned by many statisticians, and generally found lacking robustness.

In the aftermath of all this scientific squabbling, the temperature record for the Antarctic that still indicates warming of approximately 0.1 degrees per decade in spite of satellite data indicating cooling of nearly the same magnitude for the same period. 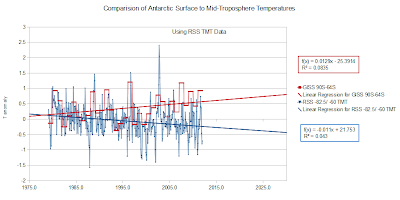 The chart above I produced using the surface temperature data available from NASA GISS for the Antarctic region, latitude 64S to 90S in blue and the Satellite data from Remote Sensing Service, RSS for the mid-troposphere latitude 82.5S to 60S. There is a blind spot in the satellite data for the coldest region of the Antarctic, so the two are not exact comparisons. They should be close enough for a reasonable comparison of the trends for the region.

My question is how much impact would this little mathematical faux pas have on the global mean temperature used to press the need for radical economic changes to ward of Global Warming? 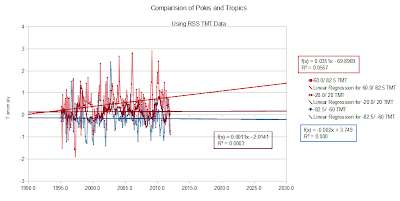 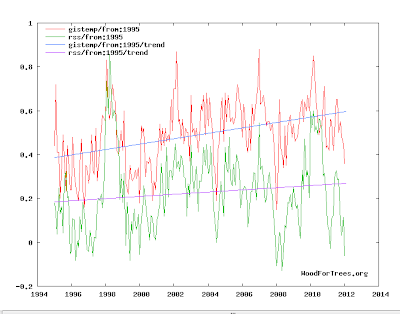 Based on this chart using GIStemp versus RSS from 1995 plotted on Woodfortrees.org, the satellite warming from 1995 to present is a little less than half of the warming shown on GISTEMP.

The surface temperature average has been checked by literally thousands of scientists and bloggers. For some reason, the error in the Antarctic still exists and is never pointed out by the scientists advocating radical economic change to combat Global Warming. In fact, the Steig et al paper is still being considered for inclusion in the next version of the IPCC report despite its numerous flaws. Micheal Mann has even published a book on his views of the Climate Wars, where he perceives he is being unfairly criticized by skeptics of his "science". Just about everything that can be done, other than attempting to fix the obvious mistake, is being done.

Personally, I believe I would have to fire a few climate scientists that feel paranoid of the skeptical public should the skeptical public point out their inability to use a basic tool like math. Luckily for some climate scientists, I am not in charge. Should someone that is in charge happen upon this post, hopefully, they will fire a few of the more outspoken scientists that are more concerned with publishing new work, than repairing poor quality work.
Posted by Unknown at 12:03 PM