There was a warm period in medieval times when the Vikings settled Greenland and even started to settle in the Americas near Newfoundland. That all changed because a group of scientists could not find evidence of the warm period globally. If it wasn't global it didn't count.

That created a bit of controversy, because all of us older folks had been taught that there was a Medieval Warm Period and a Little Ice Age. The global warming scientists thought that the MWP was not very big and that the LIA probably was not either. That would mean that we, mankind, where causing unprecedented warming of apocalyptic proportions. We, mankind, were all going to die or at least be in some way harmed or inconvenienced, if we do not change our productive ways quickly.

So what is the big deal about the MWP and the LIA?

This shows unprecedented warming in the orange but not so much in the blue. So it is clear that something happened more in the Taymyr area than happened in the SSA area. That something is likely us, mankind, doing something. That something was definitely farming and industry. So we, mankind, have probably had an impact on climate. Since the impact is greater in the North than the south, farming has an edge on the impact with CO2 released during industrialization coming in second. At least that is my interpretation,

There is one issue though, Taymyr does not start at the same time as SSA. By averaging over the entire length of both reconstructions, I have an average, but I do not know how those averages relate to actually temperature. 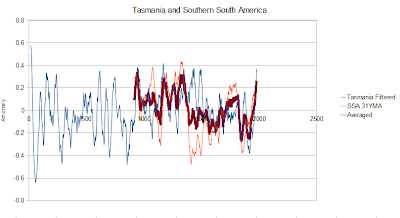 To start, I used the UAH southern hemisphere ocean data which I tried to match to the Hadley CRU version 2 SST data. My legend has a typo, it should be HADSST2. Since there is a bit of a dust up over the new version, I just used the one I had. Since I had already adjusted the averages for the Tasmania and Southern South America data, I shifted the two instrumental data sets to overlapping periods. I actually came out in the ballpark of what it should be as best I can tell.

Starting at 1400 AD I get the most dramatic hockey stick! Unlike most data splices, I used the 31 year moving averages for the proxies and the monthly for UAH and annual for HADSST2. So without including error bars, the noise of the instrument gives a rough idea of the range of temperatures now versus the smoothed proxy data.

This is the same data starting in 900 AD, that includes the MWP and the LIA. So today is probably warmer that those periods, but with the fluctuation of the instrumental data, it is hard to say how much.

This plot starts in the year 1 AD with all the same data. The Tasmania data goes back a lot more, but this is probably the highlight. So the only thing you can conclude is that the MWP and the LIA were global, but in the Southern hemisphere the change was probably not all that much. The big changes were in the Northern Hemisphere most likely. The funny part is that sea surface temperature doesn't look like it bothered changing much. The big changes around the end of WWII are probably just noise.
Posted by Unknown at 12:32 PM