What's up with the Southern Hemisphere?

I love it when statisticians try to explain why some things are significant and others are not. Climate science is heavily statistical with out the benefit of the advice of the heavy weight statisticians. 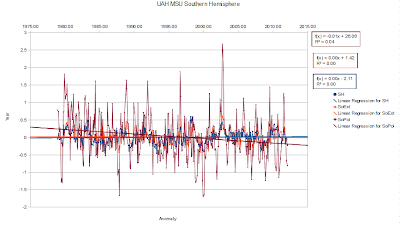 Global warming should include the entire globe. Half of the global isn't buying into the global warming projected, predicted or fantasized by the climate scientists. Now why would that be?

The Antarctic in winter receives no solar energy. The only energy it can receive would be from the ocean circulation, atmospheric circulation and the upper troposphere/tropopause. For the Antarctic to be cooling in the midst of the most noticeable anthropogenic greenhouse forcing ever, it must be cooling because of the troposphere/tropopause. It should be, because there has been a change in the radiant forcing partially because of additional greenhouse gases. That sounds like a contradiction? Not really. 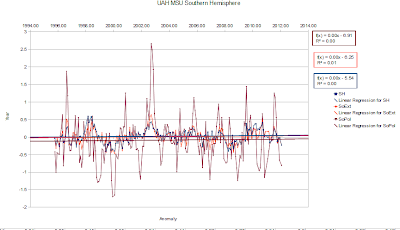 With the short length of the satellite temperatures and the unreliable nature of the Antarctic surface temperature measurements, it is impossible to tell accurately, but total global feedback to radiant forcing appears to have caught up with radiant forcing around 1995.

With a prolonged solar minimum, there is likely to be over 0.2 degrees of cooling until the same feed backs that caught up with radiant forcing, fall back to compensate for reduced radiant forcing. Thermal inertia of the ocean upper third is the likely main feed back for this case. What the final temperature will be in indeterminate. There is too much uncertainty in the long term temperature reconstruction to tell what should be average temperature for this period in the history of the Earth.

The inverse relationship of the Antarctic and tropopause to radiant forcing does appear to be the primary driver of one of the internal climate oscillations. More accurate measurement of the Antarctic temperatures should provide insight into future decadal length weather and climate change. However, with all the potential climate perturbations, volcanoes, magnetic field fluctuations, solar cycles and undesirable encounters with objects in space, it is not likely that long term climate is predictable. There is indication though that land use and atmospheric pollution does impact climate, there is still the question of how much by which though.

I would not bet the farm that the statistically challenged climate scientists have much of a handle on the situation, at least, until they can do a better job explaining what is happening in the Antarctic.
Posted by Unknown at 9:50 AM