Everything including the Kitchen Sink

There is a new paper being discussed with a bunch of ideas about how to do climate modeling.  Mathematical and physical ideas for climate science by Valerio Lucarini, Richard Blender, Corentin Herbert, Francesco Ragone, Salvatore Pascale, Jeroen Wouters.  They hit on just about every method I have seen mentioned for improving climate modeling.  I am not particularly sold of some of it and most of it is over my head, but there are a few nice points, mainly fluctuation dissipation analysis.

Variability is inefficiency.  I have used the analogy of rattling the pot lid as in relieving pressure or releasing energy with respect to sudden stratospheric warming (SSW) and Arctic winter warming (AWW). The atmosphere can only hold so much energy before something has to give.  A good deal of this pressure relief is due to deep convection and there is also increased pole ward advection.  Unless I know how to convincingly "prove" as in mathematically, how much impact there is, I would rather stick to simple models and treat the chaos as uncertainty.  If you can live with the uncertainty range, no sense getting too carried away with the nits.  That doesn't mean you can't "see" what is going on, just you can only go so far quantifying the effects. 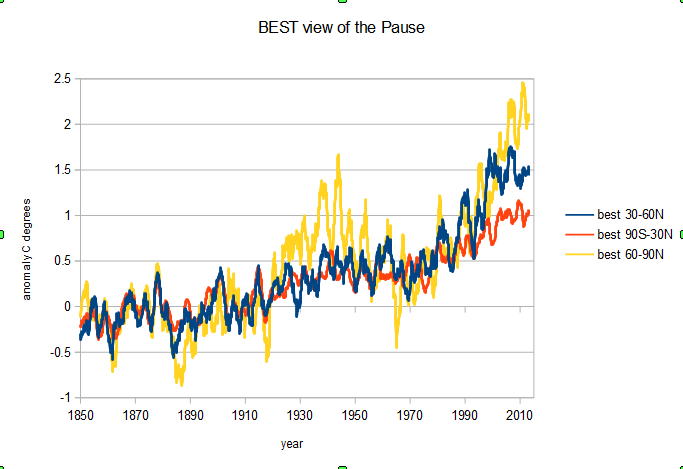 This chart of BEST temperatures with the interesting latitude bands is a pretty good illustration of fluctuating dissipation.  When the NH reaches a energy retention limit, the Arctic tends to relieve the pressure.  With the "pause", you have an increase in SSW and AWW magnitude and thanks to the scaling factor aka amplification, there is a lot bigger increase in temperature in the colder lower specific heat capacity regions.  A stable polar vortex and/or northern jet stream help retain energy and increase advection, either through the stratosphere, SSW or troposphere AWW, destabilizes these vortexes releasing energy and causing pretty severe winters down to the subtropics.

This variation is typically "blamed" on the AMO and/or PDO, but the more likely cause is the tropical wanderings and the Quasi-Biennial Oscillation (QBO).  Tropical wanderings would be ENSO like variations that result in the western Pacific and Indo-Pacific Warm Pools reaching a deep convection triggering temperature.  That is the reason I have been playing around with "Peak" tropical reconstructions instead of average reconstruction. Triggers or tipping points are generally extremes not averages.  So instead of jumping in feet first with the heavy math, I feel it is better to simplify the situation and estimate a realistic uncertainty that is likely "irreducible", then decide if it is worth the effort to get serious with the math.

Since my real goal is a simple back of the envelope style explanation I am satisfied with accepting the limits I find reasonable.  It is hard to avoid dreams of the ultimate mathematically rigorous treatment, but realistically you can only go so far with a planetary scale chaotic system.

Statistically, you can do a lot of neat looking stuff, but tipping points aren't all that well behaved so something is likely to bite you in the butt, especially when the tipping points are subtle like a reduction in variability that leads to a quite build up in energy that produces a super El Nino that inspires deep convection that changes stratospheric water vapor and ozone concentrations leaving all the experts scratching their heads.  The trigger for these events can be as simple as a shorter solar Schwabe cycle that reduces ENSO variability or a relatively weak volcano that destabilizes the polar vortex.

As I have mentioned before, pole ward advection of tropical ozone and water vapor adds about 50 degrees to the poles with only about 8 Wm-2 of "global" forcing change.  The average annual variation in forcing at the top of the atmosphere is around 10 Wm-2 so a couple of Wm-2 during one winter season would be easy to miss.  That could produce a 12 C change at one of the poles that could be lost in the general "noise" at the poles anyway.  The Cowtan and Way kriging method "discovered" about 6 degrees of that change just by using satellite data to fill in a few blank spots.

Adding CO2 should reduce variability, which does what?  That right sports fans, lead to more variability.  In a chaotic system there are lots of counter intuitive possibilities.

So I am tossing out that paper for them what to beef up their mathematical options, but I think it will be some time before any of it will convince the true believers they have bitten off more than they can chew.