I have discussed this in numerous posts but thought I might as well consolidate some of that here again.  All of the land "surface" temperature products produce a "global" result that is very consistent with each other using different data sets and methods.  That is a great validation of the "surface" temperature.   Locally though there are very obvious differences in results for small areas that are "unique" in some way. 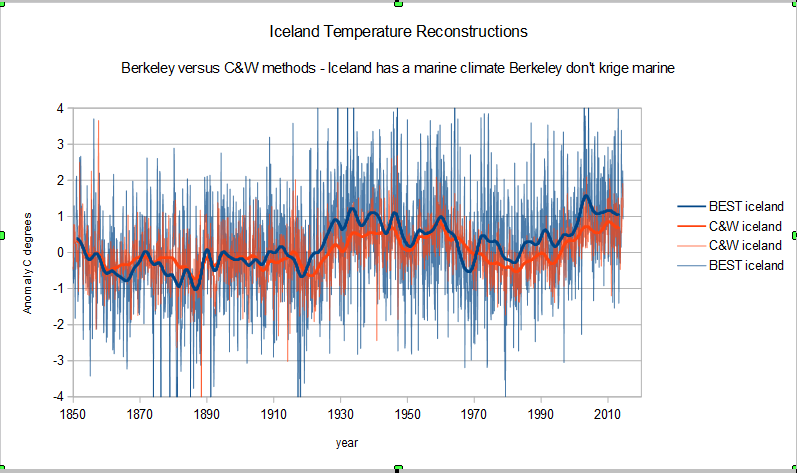 Iceland is one example.  This chart compares Berkeley Earth with the Cowtan and Way kriging methods using Climate Explorer masking for the data.  I included the monthly data in the background and a 27 month 3 stage cascade  filter in the fore ground.  Berkeley produces a "country" product while Cowtan and Way doesn't, so I used Climate Explorer to hopefully produce an apples to apples comparison.  There is a fairly obvious difference in the results in Iceland for the two methods.

On a "global" scale the difference is meaningless, but if you happen to like maintaining Iceland's temperature record as pristine as possible, you might be concerned.  Any type of interpolation will result in some smoothing of data and very strong or "unique" data points will tend to be smeared across a larger area that normal "average" data points.  Kriging is a more "unbiased" way of interpolation, but that doesn't mean it is a perfect form of interpolation.

Iceland has the energy versus temperature anomaly issue I harp on in spades.  If you were kriging gold deposits you would want to include some indication of yield along with existence for any sample point.  If Iceland were the "mother lode", no other point would ever compare to Iceland.  So if you interpolate/krige a location north of Iceland that has a huge rise in winter temperature from say -36 to -26 C degrees with a southern area that has a small decrease in temperature from +15 to +14 C degrees, you would think Iceland warmed significantly.

The energy per degree change for the northern location would be about 3.2 Wm-2 and the energy for the one degree change for the southern location would be 5.4 Wm-2 excluding any latent energy change.  Energy wise, the southern location should be given greater weight during the interpolation.  For this particular case temperature anomaly would result in a 4.5 C change while energy anomaly excluding latent would result in a 3 C change.  So you need to include absolute temperature (or energy) when determining what a "peer" for Iceland should be for interpolation.

Since you don't have accurate latent data, you will never reach a perfect interpolation method, but including "sensible" energy will at least improve "pair" or "peer" selection if you want to produce a reasonable "local" product.  Once different methods start reducing "local" differences, there would be some progress made toward a consistent treatment of the energy that temperature anomaly is supposed to represent.  Then possibly "local" and "micro-site" impacts might be discernible.