The discussion is going on at Climate Etc. thanks to a post by by Roger Pielke Sr., Phil Klotzbach, John Christy and Dick McNider.  Of course there are the typical uncertainty strawmen being toss around, but the tropical troposphere should be amplified  with respect to surface warming by a factor of between 1.1 and 1.6 depending on the region and surface being considered.

The tropical lower stratosphere is projected to cool with increased GHG forcing so it is supposed to be a "signature" of GHG warming.  Unfortunately, there are more GHGs than CO2 and the changes projected depend on what is assumed to be a "normal" condition.  This leads to the never ending discussion over initial versus boundary value problems.

That opens the huge can of observational worms.  If a data set disagrees with the model "projections" it is suspect and subjected to "re-analysis". The RATPAC or radiosonde data above has been severely criticized and since it tends to agree with the satellite data provided by the Microwave Sounding Units (MSU), so are they.  It can get very confusing because it isn't exactly a "simple" problem.

The uncertainty this case isn't as much of a problem because the difference between observation and "projection" is so huge it is pretty hard to mistake.  I use the Lower Stratosphere, 100-50 millibar data inverted for this example so there is a direct comparison, to show that stratospheric cooling is proportional to ocean surface warming and there is an amplification factor.  Just looking at temperature anomaly though doesn't really explain why. 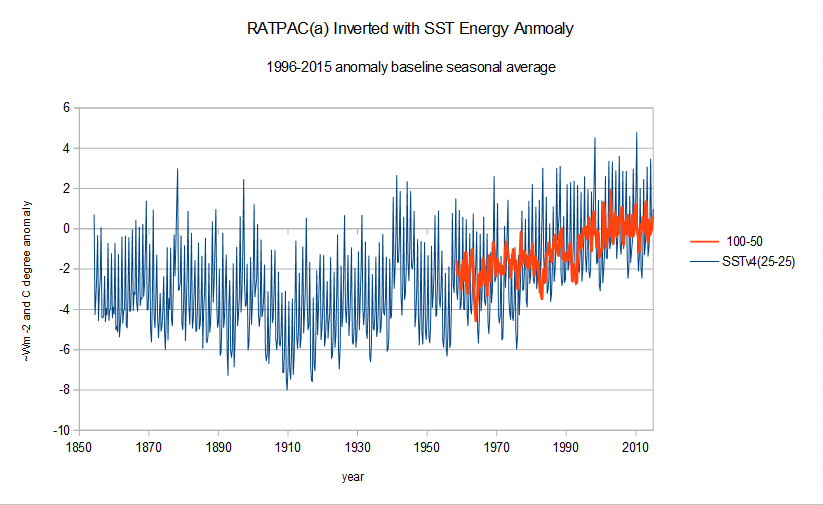 By converting the tropical SST anomaly to an energy anomaly using Stefan-Boltzmann you can see that there is close to a 1:1 ratio of SST energy change to Lower Stratosphere temperature change.  This is one reason I am so focused on tropical SST reconstructions.  Following the energy which is mainly derived from the tropical oceans is just a simple way of looking at the problem.

Water vapor is one of those GHGs and increasing SST would increase the water vapor, but water vapor also has regulating properties (feedback) such as clouds and deep convection that are dependent on a "sweet spot" temperature range.  Most of the latent energy transferred to the atmosphere is heat of vaporization, but in the atmosphere the dewpoint temperature and freezing point temperatures are not separated by many degrees so there is a stronger temperature regulating response.  If climate models underestimate that "sweet spot" convective triggering temperature and the response curve, it isn't linear, then they wouldn't find a tropical tropospheric hot spot as large or located where they might expect.  The models can make small linear approximations of the response, but then you need to have the initial values correct.  Replacing the convective trigger parameterization with a "real" physics based calculation would take too much computer time/power, so there is considerable research into what parameterizations produce the best results.

The aggravating part of all this to me are the "signatures".  There are so many inter dependent or coupled variables that "signature" is useless without knowing what "normal" is supposed to be.

With that in mind, comparing "surface" temperature to RSS MSU troposphere interpretations and UAH MSU troposphere interpretation is limited because they seem to be measuring different parts of the troposphere.  RSS provides a temperature for their lower troposphere product that indicates it is measuring in the atmospheric boundary layer.  Thanks to heat of vaporization and fusion, their product would have less warming so it is oranges to UAH's apples.  RSS is useful in my opinion for lots of things, but this just isn't one of them.  It is simpler to skip the turbulent troposphere all together and use the lower stratosphere data especially since it agrees well with the ocean surface temperatures/energy.
Posted by Unknown at 9:47 AM