This cartoon representation of past climate is used by many of the warmist minions to inspire others to climb aboard their bang wagon.  Other than some technical issues, it is a fairly accurate representation of past climate smoothed to about 1000 years.  If you smooth instrumental data which only has at most 250 years of data, to the same period, you would get one point at about zero for the end instead of a hockey stick blade at the end. The team of Rosenthal, Oppo and Linsley published a new reconstruction of intermediate water temperatures which they used to estimate changes in total ocean heat content.  They unfortunately yielded to peer publishing pressure and overly hyped their results which had a few non-fatal errors with a claim that current warming of the ocean is 15 times greater than any other time during the Holocene. 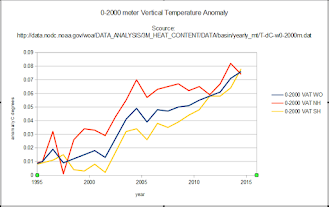 For the past 15 years which includes the newer ARGO data, the increase in 0-2000 meter ocean temperature is about 0.035 C per decade.  That corresponds to an energy accumulation which can be quantified in a number of ways.

If you are trying to sell your product you need to grab attention.  Everyone should know this, but the minions of the great and powerful carbon aren't exactly the sharpest tacks in the box.  Unit changes and big numbers should be part of everyone's bullshit detector.  Hiding smoothing time frames should also be a BS detector input. 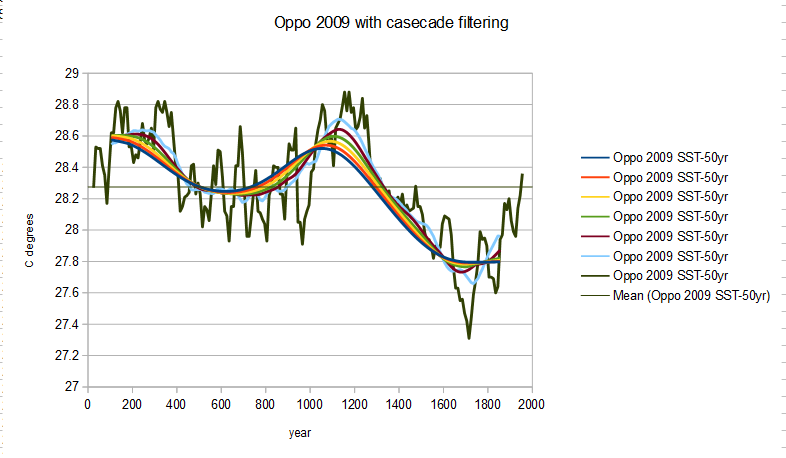 This is an example of smoothing selection on the Oppo 2009 IPWP temperature reconstruction.  I smoothed at 200 years with 5 stages or cascades.  The first two stages shift the peaks and valleys and every additional stage reduces the slopes.  If I added enough stages you would end up with just the average for the whole period as a straight line.  Note the legend, SST-50yr.  the original data has a t best a 50 year resolution so if you are going to compare to observation you should smooth obs by 50 years to have a reasonable apples to apples comparison.  Well, SLR does the smoothing for you.

If you look at this chart again you can see that SLR likely fits the 3rd cascade or so. 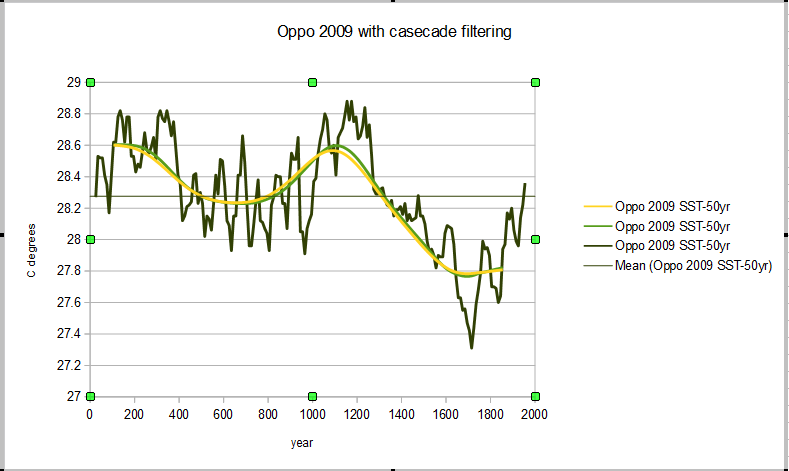 No filtering method handles end points very well, so if I splice instrumental observations to the end I would be some abrupt shift in the slope, in this case it could look like an unprecedented 15 times greater than any time in history.  Since nature does its own smoothing, a scientist needs to figure out how that impacts the end points before splicing data from a different source on the end.

This is all super basic stuff.  However, if you aren't familiar with this basic stuff, people can play you or themselves with "unprecedented" claims.

The trick is figuring out if they are trying to play your or have just played themselves.  If they play the units game without providing a reference to more familiar units, they could be playing you.  So if you think they are smart enough to know better, you might think they are being con men.  But never underestimate the human capacity for stupidity.  They probably just aren't quite as smart as they think.