New papers getting a look

Bjorn Stevens and crew have been busy.  I stumbled on a Sherwood et al. paper that included Bjorn Stevens as one of the als.  The paper concerns some issues with the "classic" radiant forcing versus surface temperature and "adjustments" that should be considered.  If is reviewed and ready for publication but hasn't hit the presses yet.  A biggy in the paper concerns the "fungibility" of dTs which I have harped on quite a bit invoking the zeroth law of thermodynamics.  "Surface" temperature where the surface is a bit vague isn't all that helpful.  Unfortunately, surface temperature is about all we have so there needs to be some way to work around the issues.  Tropical SST is about the best work around, but that really hasn't caught on.

In my post How Solvable is a Problem I went over some of the approximations and their limitations.  I am pretty sure the problem isn't as "solvable" as many would like, but it looks to be more solvable than I initially thought.

Since Dr. Stevens also have a recent paper on aerosol indirect effects, I thought I would review the solar TSI and lower stratosphere correlation. 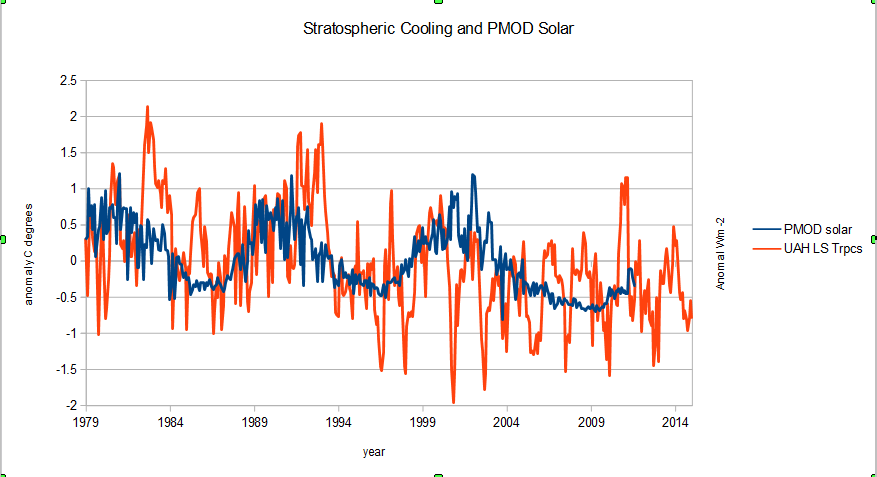 I got pretty lazy with this chart but is shows the rough correlation which is about 37% if you lag solar by about a year.  It is better when volcanic sulfates are present in the tropics, but I can safely say most of the stratospheric cooling is due to a combination of volcanic aerosols and solar variability.   The combinations or non-linearly coupled relationships are a large part of the limit to "solution".  When you have three or more inter-relationships you get into the n-body type problems that are beyond my pay grade.  You can call it chaos or cheat and use larger error margins.  I am in the cheat camp on this one. 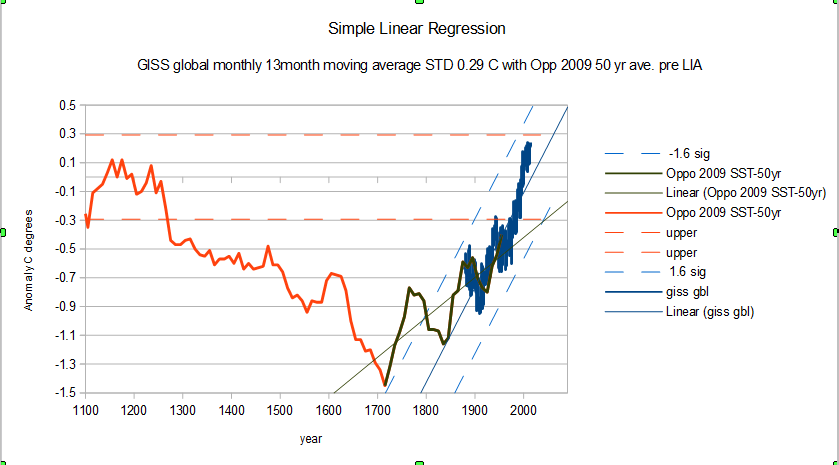 We are on a simple linear regression path and about to intersect another "normal range" so surface temperatures in the tropical oceans should crab sideways in the "normal" range with an offset due to CO2 and other influences.  Not a very sexy prediction but likely pretty accurate.  "Global" SST with light smoothing should vary by about +/- 0.3 C and with heavy smoothing possibly +/- 02 C degrees.
Plus or minus 0.3 C is a lot better than +/- 1.25 C, but with one sigma as error margins there is still a large 33% error window.  So technically, I should change my handle to +/- 0.3 C to indicate an overall uncertainty instead of the +/- 0.2 C, CO2 only claim  That would indicate that I "project" about 0.8 C per 3.7 Wm-2 from the satellite baseline with +/- 0.3 C of uncertainty.  The limit of course is water vapor and aerosols which tend to regulate the upper end.  Global mean surface temperature still sucks, but with the oceans as a reference, it sucks less.  This hinges on some better understanding of solar and volcanic interacting "adjustments" which is looking more likely.

If there are more ocean, especially tropical ocean papers that attempt to estimate "sensitivity" sans the flaky land surface temperature 30%, my estimate should start making more sense.  It is heartening to see clouds being viewed as a regulating feedback than a dooms day positive feedback which took a lot longer than I expected.  Still a bit surprised it took so long to the dTs "fungibility" issue to be acknowledged since that was about my first incoherent blog post topic.  "Energy is fungible the work it does is not" was the bottom line of that post.  Since we don't have a "global" mean surface energy anomaly or a good way to create one, adjusting dTs is the next best route.  Then we may discover a better metric along the way.  Getting that accepted will be a challenge.

With more of the sharper tacks being paid attention to, Stephens, Stevens, Schwartz, Webster etc., this could turn into the fun puzzle solving effort I envisioned when I first started following this otherwise colossal waste of time.