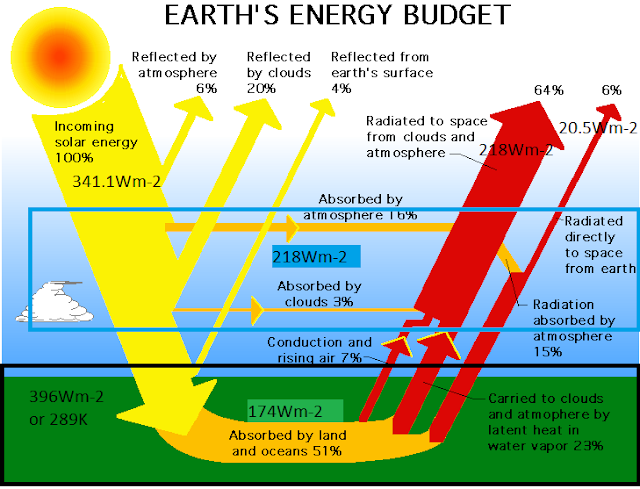 The drawing above the the older NASA Earth Energy Budget which was once on Wikipedia.  There was a little controversy about this budget since it didn't show the "GREENHOUSE EFFECT".  It wasn't intended to show the "GREENHOUSE EFFECT".  It was just intended to show the estimated average annual energy flows in from the Sun and back out to space.  I added a few numbers based on what is currently the best estimate of what the incoming solar energy is on an annual basis.  341.1 +/-0.1 Wm-2 every second as averaged over the entire 510,000,000 kilometers squared of the Earth's surface.  The large red arrow with 64% which I add 218Wm-2 plus the smaller 6% red arrow with 20.5Wm-2 I added, total 238.5Wm-2 which is approximately the total emission of energy from the Earth excluding reflected sunlight.  The Earth approximate absorbs the same amount from the Sun.

Kevin Trenberth, John Fasullo and Jeffery Keihl in 2009 published an Earth Energy Budget which fairly well agreed with the NASA budget, but list the atmospheric window energy as 40Wm-2 in order to "close" the energy budget.  This "closing" is basically sticking something some place to make the books balance.


3  The analysis by Trenberth and Fasullo (2010b) suggested that the radiative imbalance at the top of the atmosphere measured by CERES has been increasing by as much as 1 W/ m2-dec. Because of the limited heat capacity of the atmosphere such an imbalance would imply a large change in ocean enthalpy and/or surface ice amount, neither of which is observed. However, Trenberth and Fasullo (2010b) made use of preliminary CERES data for the time period 2005-2010, over which the striking trend in radiative imbalance was noted, and failed to account for uncertainty in their estimated trend.

That footnote is from, Observing and Modeling Earth’s Energy Flows, by Bjorn Stevens and Stephen E. Schwartz which is a good analysis of the current state of the Earth's Energy Budget.

The oceans are capable of dissipating energy as mass, ice or water, on to land and regaining that energy years, decades even thousands of years later.  Assuming that that is not a natural process with a longer term natural frequency is probably a foolish assumption.  With little more than 30 years of satellite data which is improving with each generation, that 10.5 Wm-2 difference in the NASA budget is an honest representation of the state of the science at the time.

That gives the Blue Box in the drawing a new significance.  With ~218 to 238.5Wm-2 absorbed by the atmosphere and ~238 emitted from the atmosphere, there is a 20Wm-2 range of uncertainty that could be a range of control.  Considering the average ocean surface temperature of 294.25 K degrees with an effective radiant energy of 425Wm-2, that could indicate a range of 415Wm-2 to 435Wm-2 for the average energy range of the oceans.  That is roughly a 3.5C degree range of allowable average sea surface temperature.

According to NASA MODIS AIRS Comparison there is a similar measured difference between the "bulk" SST used historically and the "Effective" SST that the satellites see.  What the satellites "see" would be what green house gases would "see".  This indicates what appears to be a rather complex climate control mechanism for the oceans.

That range is totally within reason if the above 60,000 year temperature reconstruction is accurate.  I believe most of that 60,000 years could be considered "natural" variation.
Posted by Unknown at 5:37 PM