Is It Really Cooling?

Has global warming turned into global cooling?  That depends on your choice of time frame.  Once upon a time, a 15 year trend was enough to justify calling something a trend.  Now 17 years is the new 15 years, so to be absolutely positive there is a trend there needs to be a 17 year period with a slope large enough to not require a magnifying glass to see.  Technically, any shorter time period that 15 years is subject to being called "Cherry Picking". 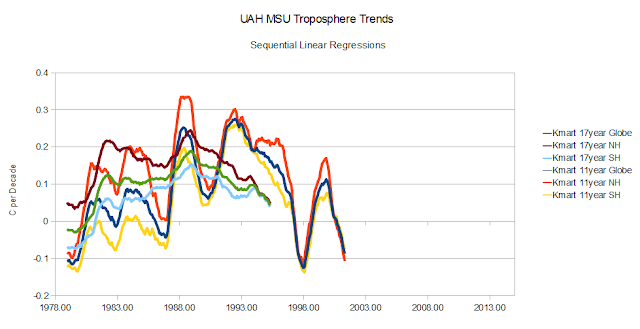 Here is a quick and dirty tool for picking legitimate or controversial "Cherries".  The zero line is no trend anything positive is warming and anything negative is cooling.  The shorter Kmart 17 year curves are every possible 17 year trend for the UAH troposphere, not lower, not middle, but the whole enchilada troposphere.  The longer Kmart 11 year curves are ... you guessed it, all the 11 year trends for the whole troposphere.

Some of you may notice that the 17 year curves do not indicate any cooling since the early 1980s.  You might also notice that around 1988, the trends peaked and since then have not only declined by are converging on a common global trend.  Neat huh?

The 11 year trends have gone negative and have also converged into a common global trend.  It is almost like they are synchronized. 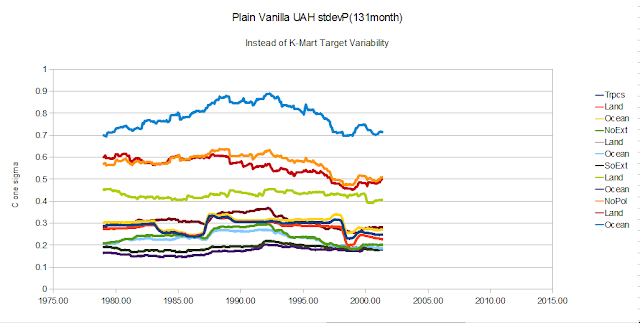 Here is another Redneck analytically tool that is fancier.  Fancy enough for a French name, Target, pronounce Tar - Zjay.  This tool is sequential 131 month (11year) standard deviations.  Most of the more volatile regions are experiencing a reduction in deviation since a peak in the early 1990s.  Some may notice the freaky yellow, orange and blue curves for the tropics, land and ocean.  Weird huh?

In case you are wondering, Plain Vanilla is the Whole Troposphere, not lower, not middle, the whole enchilada.  Now if climate were the stock market, would you be investing in warming or hedging with a little cooling?
Posted by Unknown at 7:23 AM