With an exponentially increasing population just about every thing increases exponentially.  Increasing CO2 forcing will have a natural log impact as would most every other thing that changes heat capacity.  With most every thing having the potential to product the same shaped impact curves, picking out what did what is not an easy job. 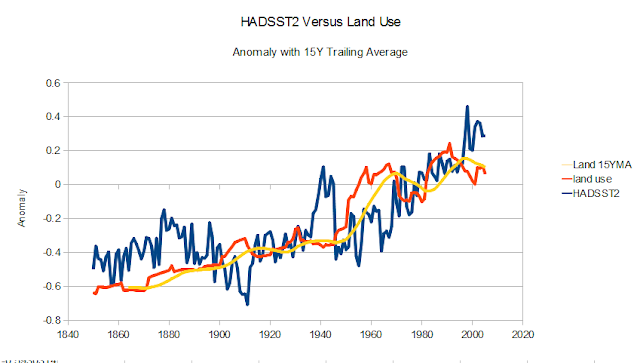 Dr. Vaughan Pratt, who is working on his own model for Human Caused Warming (HCW) turned me on to a discovery in his yet to be published paper.  There is a approximate 14.5 year lag of temperature to forcing change.  There are lots of lags in a huge system with unbelievable amounts of heat capacity.  So I mentioned that natural variability and land use can cause the same "look" in a plot.  Above is a comparison of the HADSST2 sea surface temperature anomaly with the Land Use Carbon Flux from the Carbon Dioxide Information Analysis Center.  The data provide was converted to anomaly by first shifting to a 1951 to 1980 base line then dividing by the average for that period.  It is not a perfect attempt at determining forcing, just used to roughly scale the data to the HADSST2 data.  The yellow plot is a 15 year trailing moving average use to roughly simulate the 14.5 year lag.  The carbon flux is not a perfect proxy for land use impact, but it is good enough for my purposes. 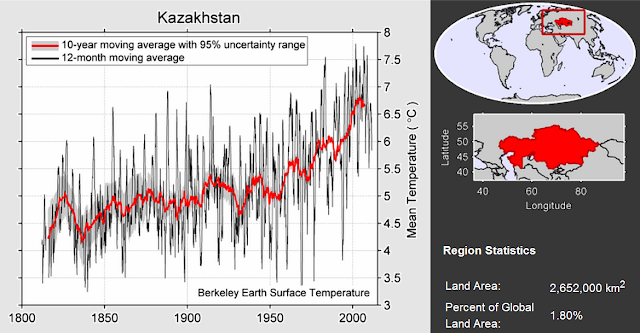 One of the regions that appears to be slightly underestimated in the land use flux data is the former Soviet Union.  The BEST plot for Kazakhstan above is for one of the regions most greatly impacted by Khrushchev's Virgin Lands Program that start circa 1953.  I have seen various estimates for the total land area converted to agriculture use during that campaign with Wikipedia estimating close to 500,000 kilometers squared.  The region impacted totals about 6.5 million km^2 in Kazakhstan and Siberia.  Before Khrushchev, Stalin and the Tsar also heavily promoted exploitation of Siberia and the 'Stans. The European Heritage Library has delightfully title article, The disastrous human and environmental effects of Soviet collectivization on Kazakhstan

That is what is left of the Aral Sea, once the forth largest fresh water lake in the world now called Aralkum, which pretty much qualifies as an ecological disaster.    The Aral Sea is often used as a poster child for Antropogenic Global Warming (AGW).  The difference between AGW and HCW is the AGW is generally assumed to be caused by CO2.  That disaster was caused by poor governmental planning which used most of the flow to the Aral Sea for irrigation of the 100s of thousand of kilometers of virgin lands converted to agriculture by the Soviets.

It is impossible to deny that warming is in some part caused by human activities, but assuming that CO2 played a starring role is a bit of a stretch when up to 6.5 million kilometers squared in just one nation was convert from natural steppe and forest into corn fields and desert.

This doesn't in any way disprove the CO2 portion of HCW, but it does tend to temper the rational that CO2 caused "most" of the warming.  In any case, there is an experiment in progress that may help determine how much is caused by what "forcing". 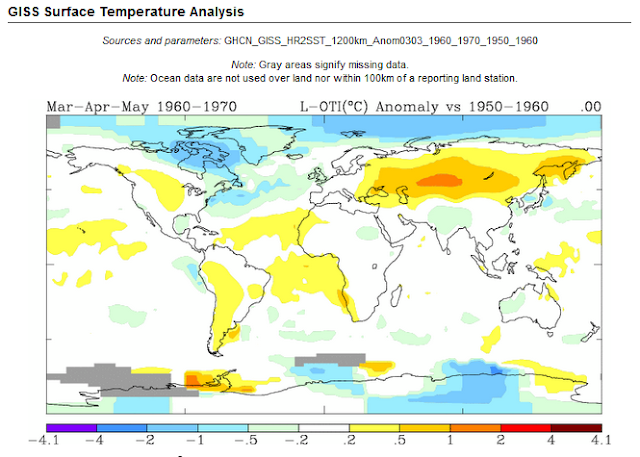 Here is a screen capture of GISS temp using 1950 to 1960 as a base line showing some serious spring warming in the general vicinity of the Virgin Lands Campaign.  That could be a natural oscillation or a not so natural oscillation.