Battle of the Thermal Equators

Averaging a world of energy flow is not something I find all that interesting.  There is a cause for the "wiggles" and since there is no general agreement on the impact of the natural wiggles over any time period, understanding the wiggles requires more than simple averaging.

The Earth has a power input from the Sun that is centered in the southern hemisphere during this phase of the precessional and obliquity cycles.  The solar input is not uniformly distributed, so there is not rational reason to assume that it is other than lack of curiosity.  Since I don't have all the software set up to accurately determine the true "solar" thermal equator, I can use the GISS LOTI 24S to 44S temperatures to approximate the impact of variation in solar forcing.  Since the sun has roughly 11 year cycles, I will use an 11 year sequential standard deviation to simulate an RMS input "shape". 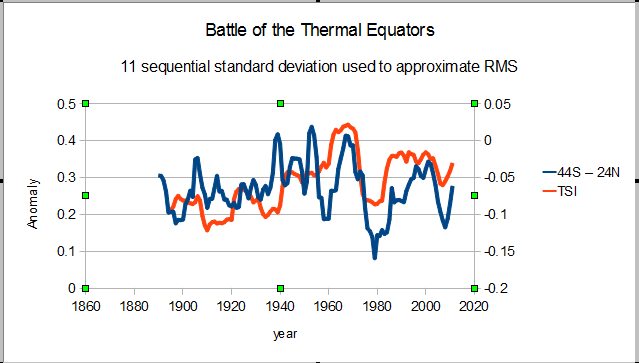 The blue curve is the difference between the solar equator and the atmospheric equator.  Just for fun, I added the Svalgaard Total Solar Insolation (TSI) reconstruction using the same 11 year standard deviation to simulate an RMS "shape" of the input power.  There is a lag of 5 years required to match these two curves.  Is the match perfect?  No, it would be silly to think that there would be a perfect match, but there does appear to be some significant correlation.  Since the solar thermal equator is south of the atmospheric thermal equator, there is actually even a reason for there to be a correlation.

Shocking!
Posted by Unknown at 6:07 AM