My why RMS has been challenged.  Hey, I can be wrong, so let's take another look.  The challenger said that solar is a half rectified sine wave.  That is close enough, though the last time I looked, the sun transformer did not have a center tap.  The solar input is actually a full peak to peak sine wave,  There is no negative energy assumed for this example.

Well a half rectified sine wave has a full half cycle of zero voltage.  We have that with the sun.  Then next half cycle has full peak to peak voltage instead of just peak.  It is assumed to be just peak because the surface is spherical, but that surface also doesn't get negative energy.  The RMS value for that cycle would be peak-peak/(2)^.5 or 0.707 times Peak-Peak.  So what's the difference? 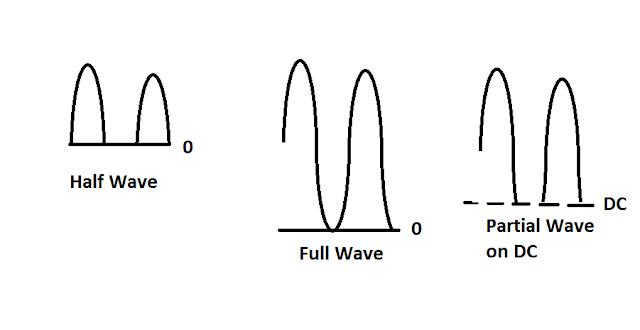 Pretty much that.  The half wave rectification would have a full 50% duty cycle.  The full wave is basically just a floating sine wave so the RMS value would be Peak/1.414.  Since the Peak is what would be the Peak to Peak for a normal alternating current wave form, you have a larger amount of energy that is obtainable.  With the partial wave on direct current, you would have an RMS value equal to the pulsing portion of the wave form.  As the DC component increases, the pulsing portion would have less impact.

There are always more ways than one to skin a catfish, so the climate science method of total solar energy divided by four works, but only if you consider the thermal capacity of the system.  That would be the DC portion.

I only bring this up, well, because of the challenge, and because the solar cycle has inconsistent periods which would be like pulse width modulation.  Depending on the internal rate of energy transfer, shorter solar periods could partially synchronize with the internal cycles creating a larger "DC"impact.  Since the oceans have the potential for extremely long lag times, longer term solar modulation could also synchronize.  Not considering the RMS values of both the input energy and the internal energy would lead to potentially large mistakes.

Update:  As a little ps, if there is no thermal capacity, then the RMS values in the latitudinal and longitudinal direction would multiply to 0.5 which would produce the TSI/4 estimate for "average" insolation.  Since the equatorial band would store energy, achieving the TSI/4 estimate would require perfect radiant heat loss.  I am pretty sure nothing is perfect, so RMS should be considered.
Posted by Unknown at 6:14 PM