Since the BEST project is adding a new combined land and ocean product to their list, I am not going to try to beat them to the punch.  I will provide a little preview of what their new product may reveal. 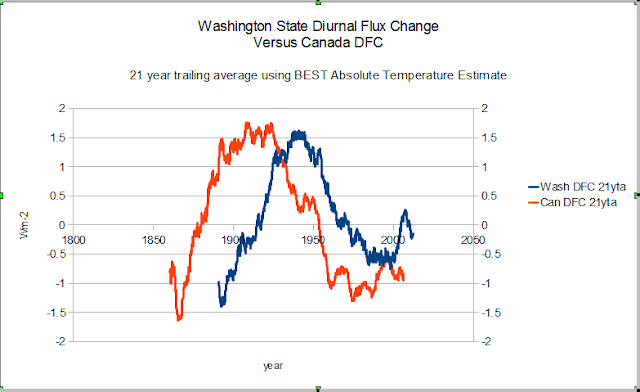 Since the cumulative impact of the Pacific Decadal Oscillation is a topic on one of the blogs and the mystery of the 1910 to 1940 "natural" peak as well, I thought I would try to combine both.  The BEST land data provides Tmax and Tmin temperature series with estimates of absolute temperature.  Using the Stefan-Boltzmann relationship, I converted the Diurnal Temperature Range (DTR) to Diurnal Flux Change (DFC) for this chart.  That is just the energy anomaly associated with DTR.  A 21 year trailing average was used to "simulate" accumulation with respect to the ~21 year Hale solar cycle.  Different averaging periods would "smear" the peaks if longer, producing a neat 1910 to 1940 peak if that is what you really want.  Since Washington State and Canada were used, there would likely be some PDO influence, but since the AMO or Atlantic Multidecadal Oscillation is just across the way, the differential between the two would likely be a stronger influence than either independently.

If the new BEST product produces reasonable absolute temperature estimates, then it could produce reasonable absolute energy estimates.  The following the energy through the system would be much simpler than it is now.  It is after all the energy that creates the temperature anomaly squiggles, so some bright young scientist may soon be new Sultan of Schwung using BEST products.

The frustrating part of this whole puzzle is the Telescope Jockey "averaging" simplifications.  In Astrophysics, if you can estimate the temperature or energy of a body in space to +/- 20 Wm-2, you are kicking Astrophysics butt.  We are not on a distant body floating in space though.  We are on our home planet with much more than just radiant physics estimates to draw upon.

Here, we have a pseudo-cyclic power supply, the Sun, and asymmetrical hemispheres with different thermal capacities and time constants.  That is why RMS values of energy should be used and more model "boxes" included depending on how accurate one would like to be.  There are layers of complexity to be considered.

Since there are Two Greenhouses with several spaces in each, radiant assumptions on a short time scales, less than a few thousand years, just ain't going to cut it.
Posted by Unknown at 5:56 AM