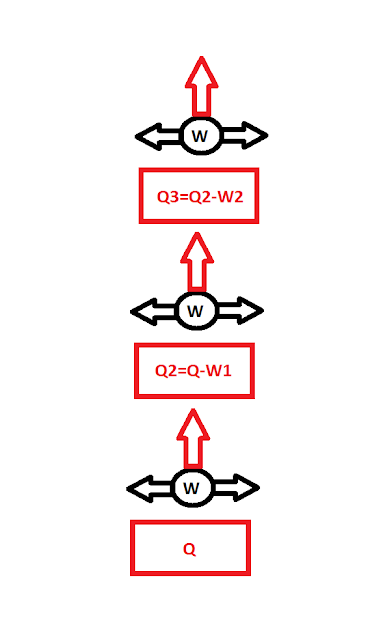 While the Sunday Puzzle mellows, here is another thought that may go with it.  Since water is part of that puzzle, consider the above steam engines of poor design.  What we want, the work, is to circulate more air.  What we lose, entropy or waste heat may or may not be feed into an new stage.

It does starting getting complicated though.  Which is why I tend to look at energy period instead of this or that energy.  So if I use just Watts for Q, we can consider these stages just heat engines and don't bother dusting off the steam tables.  That requires a little better estimate of Q.  With the tropical oceans having a peak temperature or roughly 30C and a latent heat of cooling in the range of 90 Wm-2, we can use the Stefan-Boltzmann equivalent energy for 30C of 478 Wm-2 and ~90Wm-2 for a Q of 568Wm-2

We would have to be careful with our units, but when the total work is equal to the final entropy, we would be in the ballpark of a stable system.  In other words, when internal transfer is equal to external loss there would be 50% efficiency for the combined system which might meet the maximum/minimum entropy required for a stable open system.

Just a different way of looking at things.
Posted by Unknown at 9:23 AM