"In numerous previous studies, these oscillations have been linked to everything from global warming, to drought in the Sahel region of Africa, to increased Atlantic hurricane activity. In our article, we show that the methods used in most if not all of these previous studies have been flawed. They fail to give the correct answer when applied to a situation (a climate model simulation) where the true answer is known."

This paragraph caught my eye, previous studies are flawed because they fail to give the correct answers when applied to a climate model simulation.  To me that is replacing reality with a climate model.  The models should emulate reality not the other way around.

I have been struggling trying to find ways to compare model "output" with reality which is harder than I thought because the main model output "surface" temperature, doesn't really exist.  The models have a tas output, Temperature Air Surface, which would be the air temperature at some distance above the physical surface, including the oceans, and there isn't a reliable marine surface air temperature (MAT) product that matches the land based (Tmax+Tmin)/2.  There are MAT products, but they include night MAT only which would be similar to land Tmin, but land Tmin is considered to be unreliable.  I can create a model output, 70% SST and 30% Land air temperature, but that opens the door to questions about adjusting for potential temperature and sea ice area.  The simplest solution I have found is just stick to Sea Surface Temperature (SST) which has the majority of energy anyway.

I am also not a big fan of temperature anomaly.  It has its uses, but this is an energy problem.  CO2 increase should cause a small energy imbalance, on the order of 1 Wm-2, at the Top of the Atmosphere (TOA) which should take some time to reduce to zero if in fact it does reduce to zero.  Using various models the TOA imbalance has been estimated to be about 0.6 +/- 0.4 Wm-2 compared to a surface imbalance of possibly 0.6 +/- 17 Wm-2 (Stephens et al. 2012).

To get a better feel for "surface" energy I combined the Berkeley Earth land temperature in absolute temperature and the NOAA ERSSTv4 data using the 70% ocean and 30% land ratio to create a "surface" temperature.  As I mentioned though, that isn't a "real" model output as best I can tell.  That diverted me back to the SST alone as the best model to observation comparison I can find.

The following are ERSSTv4 temperatures converted to estimated energy and CMIP5 tos also converted to energy for various ocean regions.  The data was masked on Climate Explorer which may have errors, but looks pretty reasonable.  I don't have titles on these charts, but the regions are indicated in the ledges. 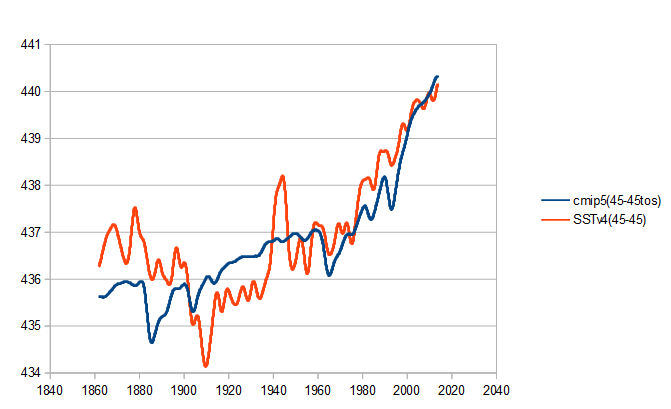 The 45S to 45N region makes the models look good.  This includes the majority of the ocean surface area and energy so the models should be doing a great job. 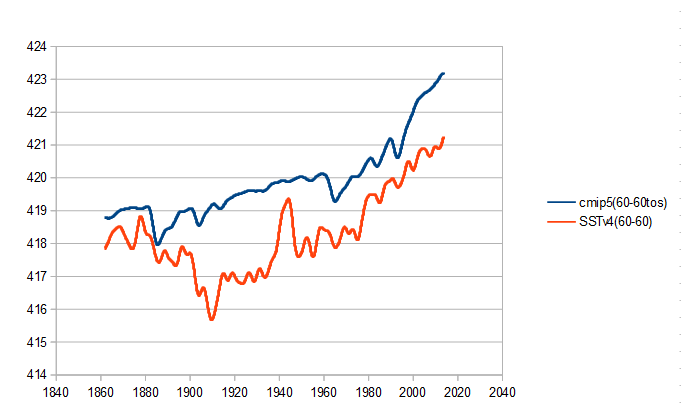 60S to 60N though isn't quite as impressive.  This indicates the models over estimated ocean energy by about 3 Wm-2 in circa 1915.

Since Mann is trying to show AMO, PMO (his term) combine to create a NMO or Northern Hemisphere Multidecadal Oscillation, let's look at the northern hemisphere oceans. 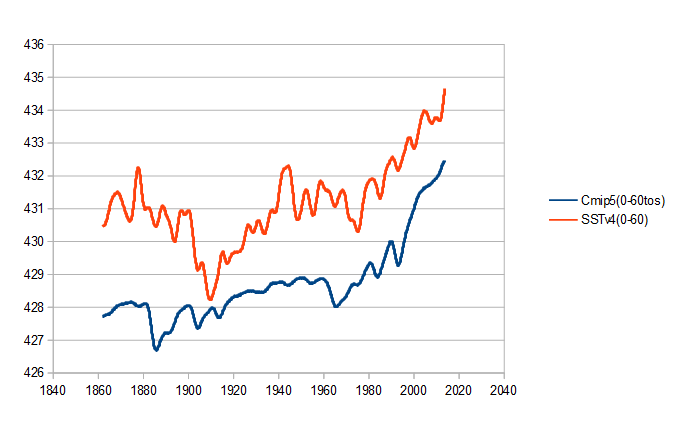 "We propose and test an alternative method for identifying these oscillations, which makes use of the climate simulations used in the most recent IPCC report (the so-called “CMIP5” simulations). These simulations are used to estimate the component of temperature changes due to increasing greenhouse gas concentrations and other human impacts plus the effects of volcanic eruptions and observed changes in solar output."  From the realclimate post with my bold.

Technical details concerning development of a 1200 yr proxy index for global volcanism,   Crowley and Unterman 2013, appears to be the newest reconstruction of volcanic forcing.  Their estimates are considerably different than those used in the "known" CMIP5 model runs with the most notable addition of a large volcanic forcing circa 1913 which is not in the CMIP5 forcing estimates and would help explain why the models consistently miss the 1900 to 1940 observations. 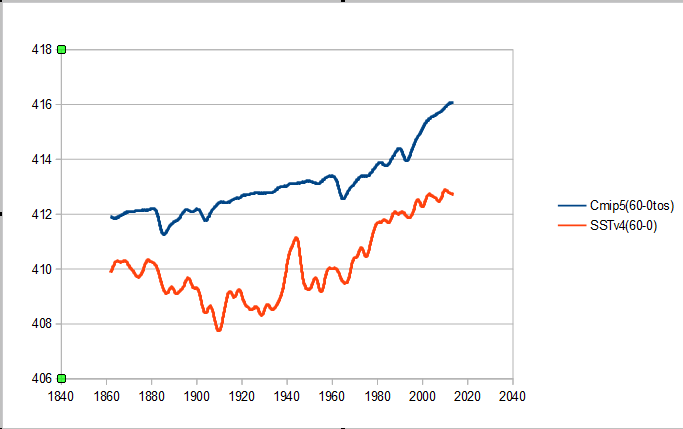 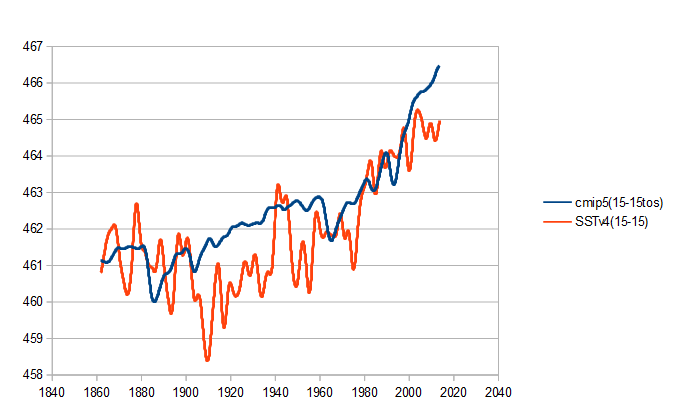 the tropics (15S-15N) might provide the best reference for how the models miss volcanic response and recovery.  That 1910s forcing is global based on the SST data and completely ignored in Mann's limited Northern Hemisphere "anomaly" comparison against a questionable "known" simulation.

Now let's see how many of the "real" scientist pick up on this.
Posted by Unknown at 8:13 AM