The Antarctic has stubbornly remained at about the same average temperature for at least the last 50 years despite the increase in atmospheric CO2. Some people might entertain the idea that warnings of polar amplification of the Greenhouse Effect are nonsense. That may be the case, but since stability is not a common feature of nonlinear dynamic systems, it is an interesting place to study. 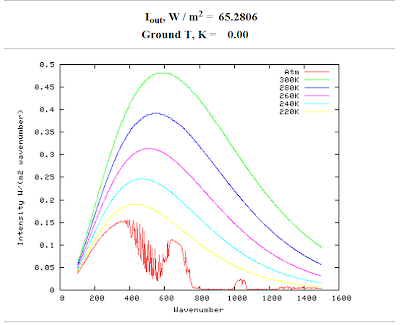 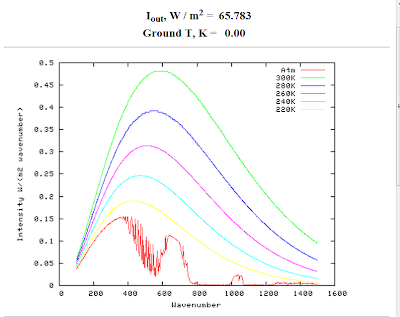 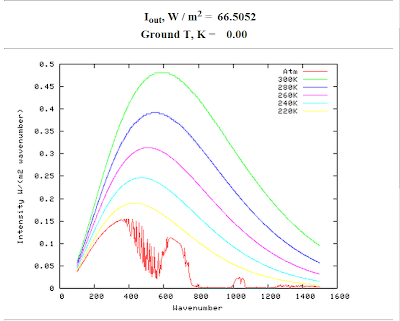 Thanks to MODTRAN and the University of Chicago we can play with the radiant spectrum to ponder what might be going on down there. The three chart above are for no clouds, subarctic winter atmosphere, -49.5C surface temperature offset with the sensor located at 2 kilometers looking up with the CO2 concentration from top down, 280ppm, 375ppm and 560ppm. On the plots is the MODTRAN estimate of the energy out at each concentration, increasing as the concentration increases. Doubling the CO2 from 280ppm to 560ppm should increase the outgoing flux at 2 kilometers by 1.2Wm-2.

Carbon dioxide also changes the thermal properties of the atmosphere, the thermal conductivity and the thermal capacity. The change in the conductivity alone for a doubling of CO2 is about 90 milliWatts, 24/7/365, which over an extended period would start adding up to real energy. That would not explain why the Antarctic is not warming though. I would have implications during a prolonged solar minimum, but not just yet.

Another way of determining the impact of the change in CO2 is consider the change in the Atmospheric R value of the Antarctic with respect to the change in possible CO2 forcing. The R-value, which I have covered before, is just a rule of thumb method of quantifying the thermal diffusion or heat loss. Using the -49C @ 280ppm as a baseline and the -89C estimated limit of the tropopause, The baseline R-value for the Antarctic is, 0.278W/K that would compare to a baseline -49C to -89C emissivity of 0.458 that I will assume is unitless, since it is the ratio of Wm^-2 out(@184K)/Wm^-2surface. At 560ppm, the R-value, using the MODTRAN estimate, is 0.280 versus the estimated emissivity of 0.450 again unitless. The change in R-value is about half the change in Emissivity resulting in a predict surface temperature change for a doubling in the Antarctic of 0.42 degrees versus the Emissivity change estimated at 1.0 degrees. Less than half the estimated impact which seems to jibe pretty well with observations. For the current 375ppm, the estimate impact using the R-values is 0.07 degrees versus the estimated GHE impact of 0.50 degrees.

While this in no way conclusive, the R-value method using the -89C tropopause limit appears to produce reasonable results. Neither method provides a definite value. The MODTRAN appears to be an upper limit and the R-value a lower limit. Considering how difficult the problem is, I consider this progress.

I forgot to mention why the R-value based estimate is roughly half of the Emissivity based estimate. It is the resilience of the tropopause as a heat sink.

Since the Tropopause appears to have a temperature limit, it and the Antarctic are very stable. The plot above, while hard to see, shows why the two estimates vary so much. Since the Tropopause tries to maintain a relatively stable temperature, it does not warm at the same rate as the surface. In fact, the additional CO2 tends to cool above the average radiant layer as it tends to warm the surface. So instead of an initial increase in the lapse rate, there is an elbow that developes in the lapse rate as the atmosphere below the average radiant layer attempts to approach an isothermal characteristic. You will note on the plot above that at 2240PPM, the elbow is just beginning to appear. Click on the image to make it bigger. 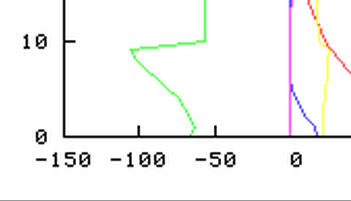 With this blow up, you can see the elbow that should begin in the range of 1120PPM. So more temperature inversions should be expected in the Antarctic as CO2 levels rise.

BTW, It seems that screen captures with paint produces much better quality charts than the stupid software that is supposed to do the job better :)
Posted by Unknown at 1:14 PM