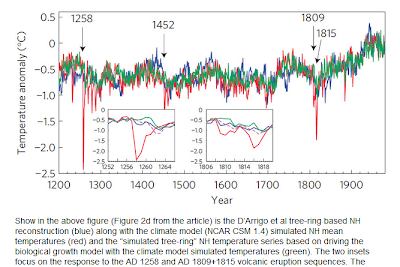 Michael Mann has a post on Real Climate on his new paper about the Little Ice Age and volcanoes. The image above is from that post with part of the text to explain the different plots.

This is a plot I made of GISS temperatures I downloaded for the NASA GIStemp site. Since the data for the Antarctic starts around 1902, I averaged all the latitude bands for the period 1902 to 2011 and plotted the global temperature average with and without the poles. With those is a plot of the average of the two poles alone. You can see the familiar shape of the global temperature average in the average of the pole much more clearly than in the global averages as this chart is scaled. For simplicity, the data is plotted "as is" from the GIStemp site in hundreds of degrees. So 200 would actually be two degrees.

While looking into the Siberian agricultural impact on northern hemisphere temperature I noticed that regional volcanoes had a strong impact on temperatures. Kamchatka, the Kurril Islands, Iceland, the Aleutian Islands and Alaska mainly, though Washington State and Japanese volcanoes also have some impact.

Here the Arctic and Antarctic are plotted separately with the global no poles. The Antarctic data is not all that great because of conditions and it is pretty obvious that the fluctuations in measurements start decreasing as we approach the 1960s. What is particularly interesting, is that the 1960 to present period shows a large increase in temperature that is not evident in any of the satellite records.

Here I have plotted the Global average using 1902 to 2011 base period without the Antarctic. The Antarctic is still on the plot so the pre-1960s noise really stands out. Polar amplification of the Greenhouse Effect is projected and a big deal. Other than the surface temperature records, there has been no measurable warming in the Antarctic and the surface stations in the Antarctic are notorious for having issues with being covered with snow drifts which can cause higher than average temperatures of not covered which could give the impression of variability that does not exist. Such is life, but how much impact could errors have on the global temperature average?

I hope that covers everyone :) The comparison of the GISS Antarctic region versus the temperature reconstruction by all those guys, does look to me to be all that great of a match. Polar amplification due to greenhouse gas forcing can have a large impact on global temperature. Polar amplification due to poor instrumentation can also have a large impact on global temperature. Which is which in this case, seems to go to the poor instrumentation part of the puzzle. There reconstruction uses tree rings which are not thermometers, so one would be more likely to trust the instrumentation, that is not always the best choice though. Trust nothing - verify everything.

This post is just on some of the questions I have on what data should have more weight in determining average global conditions. The long term tree ring proxies do not provide a good range of temperatures, but they should provide a fair indication of what "average" conditions should be.
Posted by Unknown at 6:27 AM