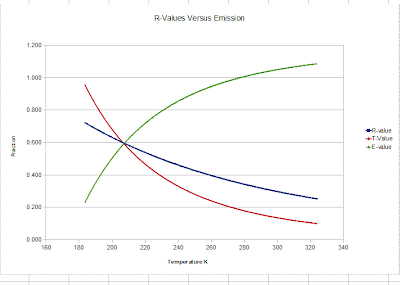 I add a new curve to the gray body, the % I for the percentage of conductive flux. It is a rough approximation, but close enough for this bit of fun. As you can see, the blue curve is the R-value based on a Troposphere temperature of 182K degrees (-91C) or 62Wm-2 at that point. I selected this because it is the rough minimum temperature, though some of the satellite data show 67Wm-2 as minimum. 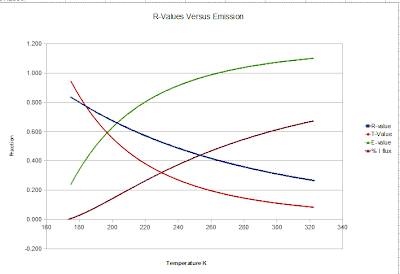 This plot is with the Tropopause temperature dropped 100C degrees (272K) 51 Wm-2 which happens during deep convection. Notice that the blue R-value curve has shifted. If the T and E curves were adjusted to cross on the R value point, the TOA emissivity would increase to about 0.7 from the normal value. 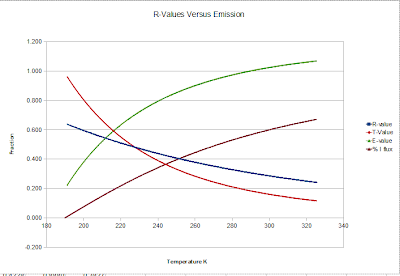 This time the plot is based on a Tropopause temperature of 190K degrees (-83C)74Wm-2. Pretty neat huh? The TOA emissivity can vary from about 0.5 with rapid cooling to 0.7 with Tropopause punch through with deep convection. I need to double check my model set up, but so far it seems fairly close for illustration of the non-linear complexities involved in measuring the net flux at the Top of the Atmosphere.

So if you ever wonder why it is difficult to measure 0.9Wm-2 of imbalanced forcing, there ya go. It is a seriously difficult critter to get a rope on :)
Posted by Unknown at 8:06 PM