What do You Choose to Believe? 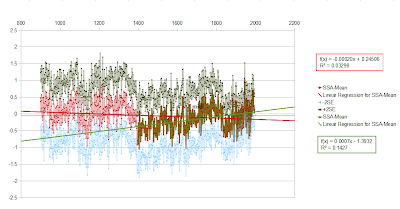 The Medieval Warm Period was only a regional event. If that is your belief, then warming in the 20th century has to be abnormal and require explanation. The chart above is my mine using the South American Temperature Reconstruction of R. Neukom1, J. Luterbacher2, R. Villalba3, M. Küttel1,4, D. Frank5, P.D. Jones, M. Grosjean1, H. Wanner1, J.-C. Aravena7, D.E. Black8, D.A. Christie9, R. D'Arrigo10, A. Lara9,11, M. Morales3, C. Soliz-Gamboa12, A. Srur3, R. Urrutia9, and L. von Gunten1,13. I don't know any of those people, but they seem to believe that the Medieval Warm Period was not a regional event. Looking at their data, South America has been warming since the 1400s. South American may have had its MWP, just a little out of sequence with some parts of North America.

" Although we conclude, as found elsewhere, that recent warming has been substantial relative to natural fluctuations of the past millennium, we also note that owing to the spatially heterogeneous nature of the MWP, and its different timing within different regions, present palaeoclimatic methodologies will likely "flatten out" estimates for this period relative to twentieth century warming, which expresses a more homogenous global "fingerprint." Therefore we stress that presently available paleoclimatic reconstructions are inadequate for making specific inferences, at hemispheric scales, about MWP warmth relative to the present anthropogenic period and that such comparisons can only still be made at the local/regional scale." That quote is by D'Arrigo, R.; Wilson, R.J.S.; Jacoby, G.C. from their abstract in the D'Arrigo et al. 2006 Northern Hemisphere Tree-Ring-Based STD and RCS Temperature Reconstructions.

If you focus on regions, your belief would be that AGW is not as much of a factor as natural warming, recovery from colder times caused by the Little Ice Age. If you look at the massive land use changes in the Northern Hemisphere, nearly 3% of the total surface area of the globe converted from wilderness to human habitat, you would assume there is some Anthropogenic warming that is beneficial and needed.

If you focus on CO2, you can determine that CO2 is causing global warming and that it is bad, because it is unintentional.

If you look at everything objectively, you may believe that some warming is good, some is natural and some may be bad, but we really don't know how much of any warming is due to any specific cause.

To my mind, having any opinion other than we don't really know, requires belief, not science.
Posted by Unknown at 6:36 AM