Now that I have a new computer and no cat in the house to help program spreadsheets, I have started playing with a thing that has bothered me for a while, how much information may there be in tree rings?
They have favorite temperature, precipitation and nutrient ranges and they don't care for pests, fires and competition. So, temperature plays an important role, but how important?

Thirty percent of growth is based on temperature I have heard. I don't know, I would suspect that is just a ballpark, but I plotted the Taymyr tree ring reconstruction along with the Central England Temperature record. That would be apples and oranges I would imagine, so the Fruit Cocktail title. 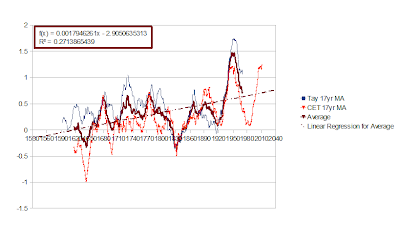 I don't like to over smooth, in this case, I used 17 year moving averages of both the Taymyr and the CET. Why 17 years? Because that is the new 15 years, of course! Then I averaged the moving averages, probably a mistake, but I wanted to see where the apples and the oranges might be comparable. Then I added a linear regression to the average of averages. The R^2 value for that regression is 0.27, so there is about a 27% probability that it means something and about a 70% probability that this was a total waste of time.

There are sections that the R^2 value would be much higher, mainly up slopes with a few down slopes and the correlation gets better as time progresses. That could be caused by a number of factors that are not temperature related. Since the best correlation begins in the neighborhood of 1814, I am leaning towards agriculture and population growth.

So I have a puzzle that may be a waste of time, what better to do than waste someone else's time with the puzzle? There ya go, you just may have wasted some time too :)
Posted by Unknown at 5:36 AM