Trying to Piece Together Russian Agriculture in Siberia

Thanks to revolts, revolutions and world wars, the history of Russian agriculture in the Siberian region is a puzzle. So this is just a deposit of what I happen upon.

Wikipedia, not a great but easy resource, mentions that over 10 million Russians migrated to the Siberian region following the completion of the trans-Siberian railroad. On average, each was given 16.5 hectares to move into the region. 16.5 million hectares is 0.165 million kilometers squared. This migration took place between 1890 and 1910. This impact does not show up in the Taymyr reconstruction as an increase in optimum growing conditions. There is a small increase in a generally downward trend, but nothing that stands out as significant.

There are some interesting points though. While the whole series does not match, the blip does have some back up with local temperatures around Omsk. Also, the Russians were producing a great deal of wheat inefficiently by world standards to pay off debt. With the new Siberian railroad, they was probably a good deal of timber harvested for export as well. I will need to check other regional commodities reports for export information. 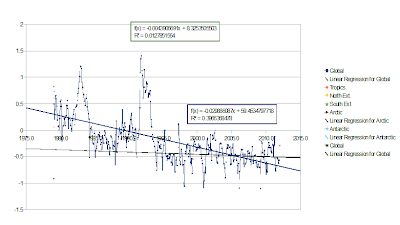 Unfortunately, the Taymyr tree ring reconstruction stopped in 1970 because, according to Jacoby, they stopped responding to temperature. Well duh! So I need to find the source of the raw data to extend the reconstruction to at least 2000, to see if the 1994 climate shift may show in the tree rings. 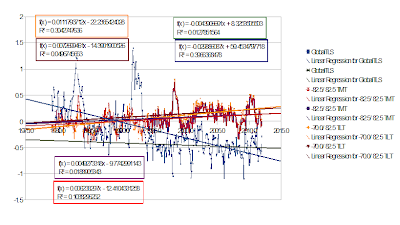 That is hard to read, so I will have to break it down or find a better program than paint to convert the chart. Anyway, the stratospheric shift is easy to see, both the mid troposphere and lower troposphere also shifted in a similar ratio. Not too exciting, but I think it is a much longer period shift that I may be able to match with the Taymyr and CET. Pretty iffy, but interesting.
Posted by Unknown at 2:18 PM